Home / Blog / More than 1,400 speak out in support of Kinzie bike lane

More than 1,400 speak out in support of Kinzie bike lane 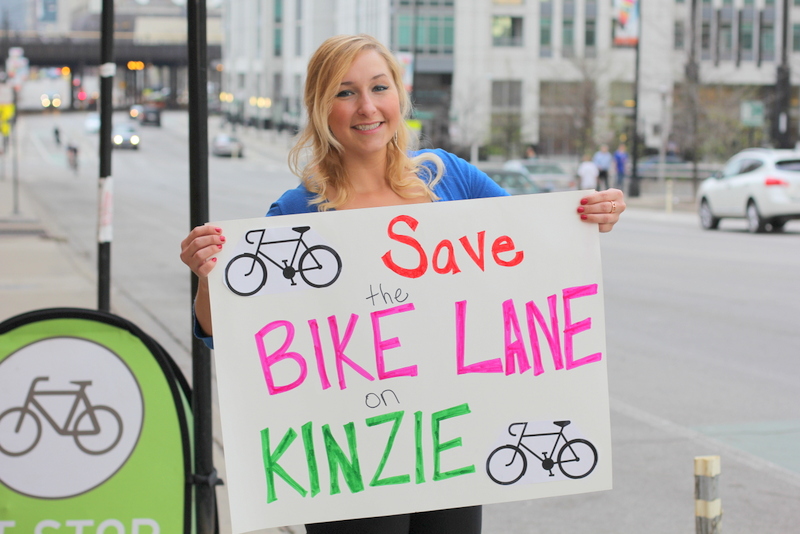 After we alerted you that 42nd Ward Ald. Brendan Reilly was threatening to force the removal of the Kinzie Street protected bike lane, you responded in a big way.

More than 1,400 Chicagoans from 43 different wards took up our call to action to save the Kinzie protected bike lane. (If you haven’t already, you can still take action here.)

Both online and on the streets, people are speaking out. In just a couple of hours on two separate days, our street team talked to more than 200 people at the intersection of Kinzie and Milwaukee.

Support for keeping and improving the existing bike lane on Kinzie was overwhelming. And it wasn’t just the folks on bikes. We heard from dozens of supportive drivers and pedestrians as well.

This outpouring of grassroots support demonstrates just how strong our growing movement has become. That’s important because not only are we fighting to save the Kinzie Street protected bike lane, we’re also showing the members of Chicago City Council that people across the city won’t accept a reversal of the progress we’ve seen on our streets in recent years.

Our movement only rolls in one direction: forward.

Given that Ald. Reilly has been among the most supportive members of the city council when it comes to building protected bike lanes, we’re hopeful this situation can be resolved in a way that meets the needs of both local residents and the thousands of people who use the street each day.

In the meantime, it’s clear that some improvements are overdue on Kinzie in order to better accommodate all modes of travel and enhance safety, from filling potholes to better protections for pedestrians. We encourage Ald. Reilly and Chicago Department of Transportation to get started on these changes immediately in advance of peak cycling season.