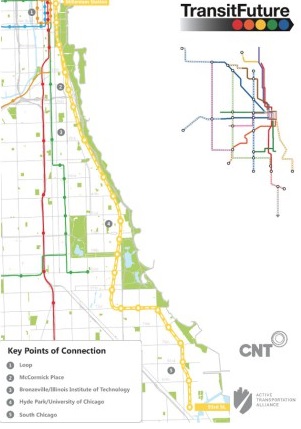 Not all communities along the Chicago’s lakefront have reliable public transit. This is especially true for many people living or working on Chicago's far Southeast Side.

Neighborhoods such as Hyde Park, South Shore and South Chicago can be difficult to access without a car.

Despite the existing South Chicago branch of the Metra Electric District (MED) and local bus routes servicing these areas, commute times for residents accessing jobs, whether in the Loop or Hyde Park, are often long due to infrequent services and traffic congestion.

The proposed Gold Line would follow the MED line, from Millennium Station in the Loop south on 93rd Street.

There would be four times as many trains on the Gold Line than MED’s current 38 trains per day, bringing more service frequency, even during off-peak times. Train arrivals would be in minutes, not hours.

By turning the MED to a CTA line, commutes for low-income residents would shorten.

Not everyone can afford to use Metra. As as result, some people with low income are prompted to take transit located far from them to avoid paying round trip Metra fares — that don't include a transfer.

By using CTA fares, they would be encouraged to use the Gold Line.

The Gold Line would expand transportation equity in Chicago, giving people better access to jobs at Soldier Field, McCormick Place and the University of Chicago.

If you live in a community near Chicago’s south lakefront, please click here to sign a letter to tell your elected officials to support the Gold Line and countywide rapid transit expansion.

This is the eighth post in our 10 lines, 5 weeks blog series. Each week from now until Labor Day, we’ll take a look at two lines in the Transit Future vision and make the case for why the county board should take action to expand the rapid transit network in Cook County.