Mobilizing for a better Milwaukee Ave. 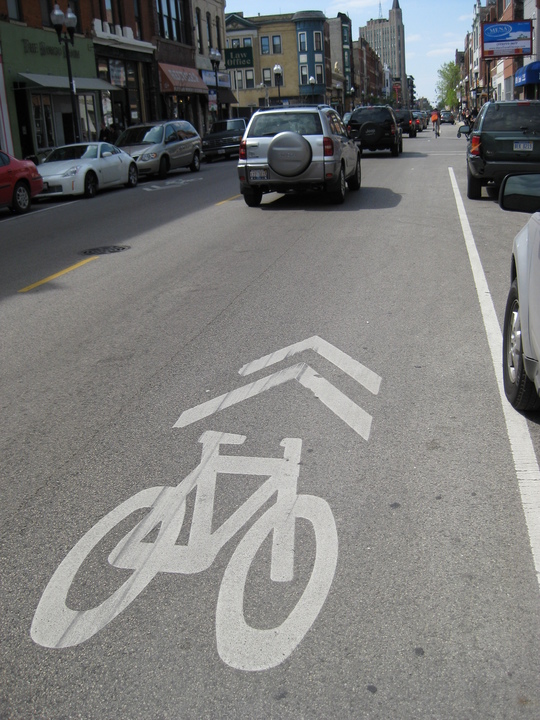 In the five years between 2011 and 2015, there were 195 bicycle injury crashes, 56 pedestrians injured, and one pedestrian fatality. There were also 74 reported dooring crashes – 6 percent of the citywide total – according to the Chicago Department of Transportation.

Despite these facts, conditions through the heavily trafficked Wicker Park corridor are still abysmal for people traveling through the area on foot or on two wheels. Faded crosswalks, crowded sidewalks, no bike lanes and other hazards make the street unsafe and unpleasant.

In 2017, Active Trans has been shining a spotlight on this well-known bottleneck in Chicago’s street network. Now, we’re taking our campaign for a safer Milwaukee Avenue to a new level.

Active Trans is working to mobilize our members and supporters to fight for safer spaces for pedestrians, bike lanes, and other common sense fixes to the street.

The next two months will be a critical window for us to rally visible support for the big changes we know Milwaukee Avenue needs. Local leaders recently announced a new process to identify and build improvements to Milwaukee Avenue in Wicker Park.

Stay tuned to Active Trans blog for updates on this opportunity to bring change to Milwaukee Avenue. For more information on how to get involved, please contact Jim Merrell at jim@activetrans.org or 312-216-0470.

In the meantime, here are some responses to frequently asked questions you may here from your friends, family, and neighbors:

Isn’t Milwaukee Avenue fine the way it is?

Even though this is a high pedestrian traffic zone and one of the busiest bike routes in the nation, people on foot must navigate narrow, cramped sidewalks, and people on bikes have but a sliver of space between moving and parked cars. Moreover, the six way intersections are dangerous.

As a result, Milwaukee Avenue through Wicker Park/Bucktown experiences a high number of preventable crashes involving people walking and biking. Between 2011 and 2015, the more recent year for which data are available, there was one pedestrian fatality and 56 pedestrians injured in crashes. Over the same period, there were 195 people injured in crashes while riding a bike.

The Active Transportation Alliance’s Safe Crossings campaign identified the Milwaukee/North/Damen intersection as having the highest number of pedestrian and bicycle crashes in the entire city between 2006-2012.

Car traffic can already be congested here. Will this make it worse?

Cars move slowly through this section of Milwaukee already, and travel times here are dictated by the volume of cars and timing of the traffic lights, not the street design. Travel times shouldn’t increase with the type of changes being considered.

And its important to keep in mind that complete streets that prioritize people walking, biking and using transit can ease congestion by helping people get around without cars.

Where will people park if street parking is moved to make the street safer for people walking and biking? Will this impact local business?

One idea under consideration, and included in the recent Wicker Park Bucktown SSA Master Plan, is to create more space for walking and biking by removing or relocating parking on one side of the street.

Milwaukee Avenue here is simply too narrow to safely accommodate people walking and biking without removing car parking on one side of the street. There are a number of options for addressing this change.

A parking study of the Milwaukee corridor conducted by the Chicago Metropolitan Agency for Planning found that while parking is congested in some areas, it’s underutilized in others. The study identified multiple strategies to improve the performance of existing parking, such making existing parking more efficient and taking a look at some facilities like loading zones that are being abused.

Businesses benefit when they are more accessible by foot and bike. For example, New York City found a 49 percent increase in retail sales after a protected bike lane was installed on 9th Avenue.

Stay tuned to Active Trans for updates on Milwaukee Avenue in Wicker Park and other projects throughout the region.