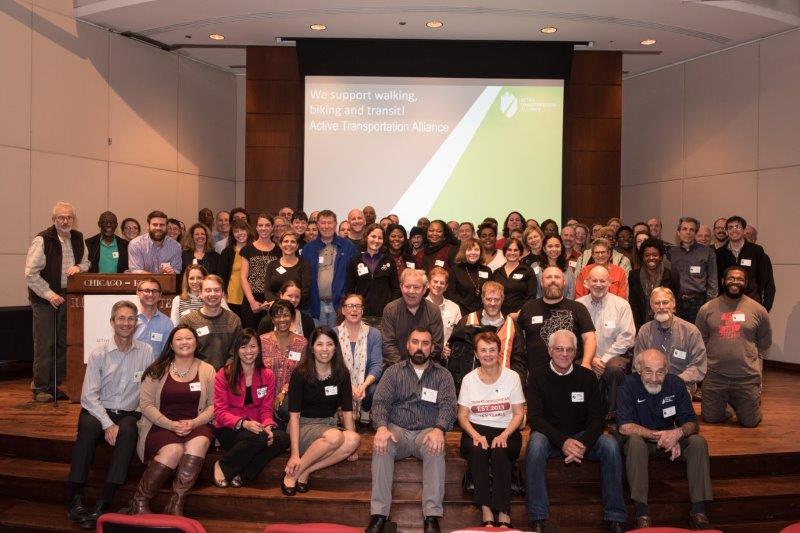 It was a great opportunity to hang out and swap stories about hard work at our volunteer events.

It also provided members a chance to get to know one another and learn about the work we do throughout Chicagoland.

The event was a key opportunity for us to say thanks to the many people who give Active Trans their time and support through the year. We’re grateful for all the people who do a great deal to help advance bicycling, walking and public transit in Chicagoland.

In addition to sharing details about our accomplishments from the past year and some exciting projects on the horizon, we also presented awards to some of our most dedicated supporters.

Scroll down to see photos of the award recipients. 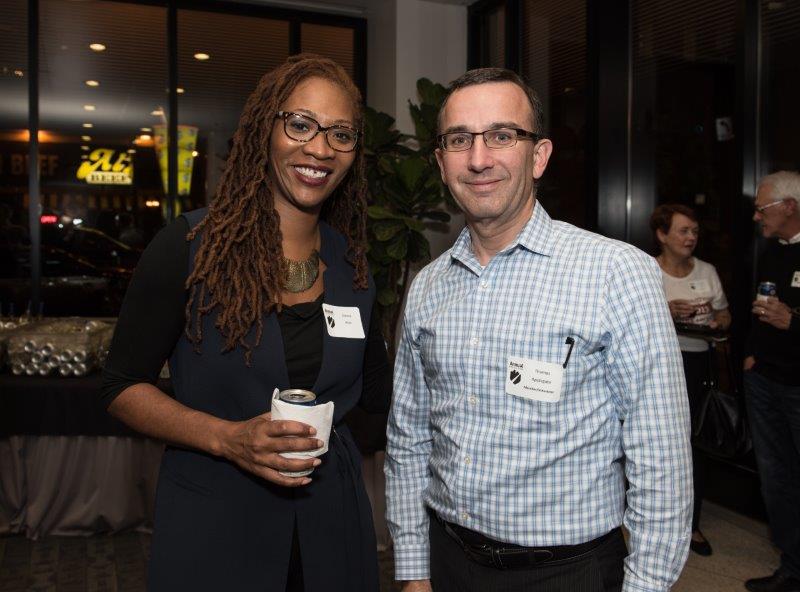 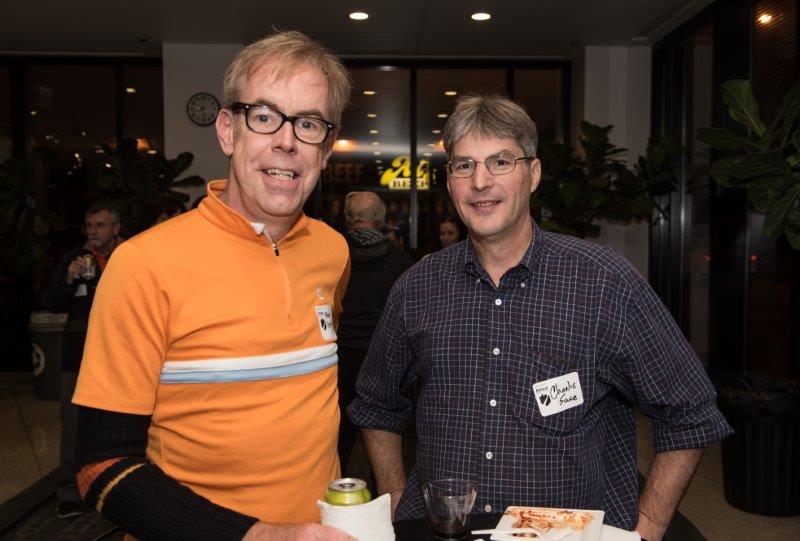 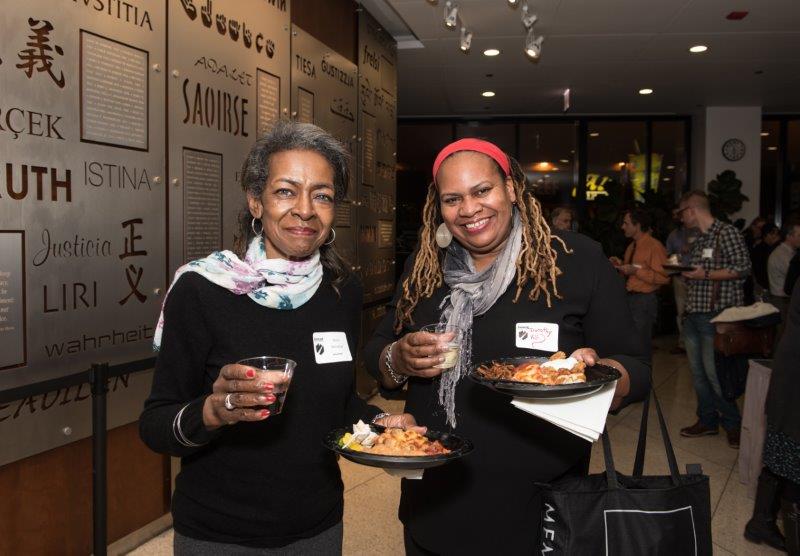 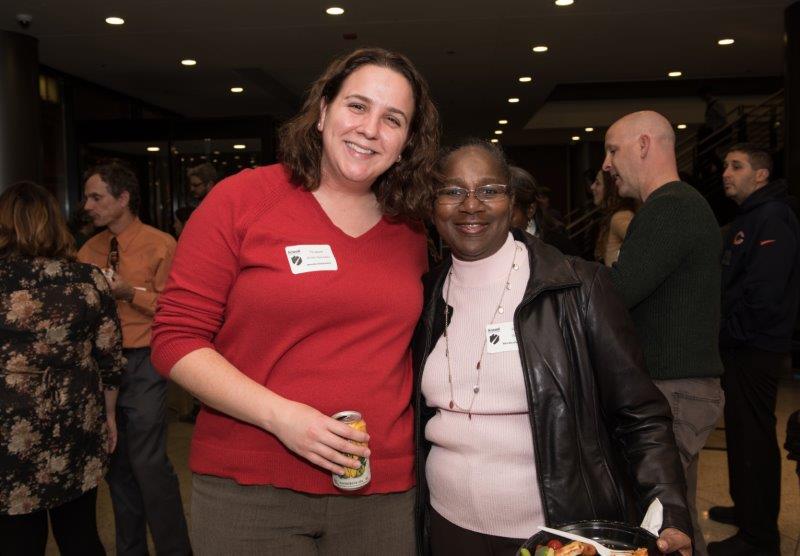 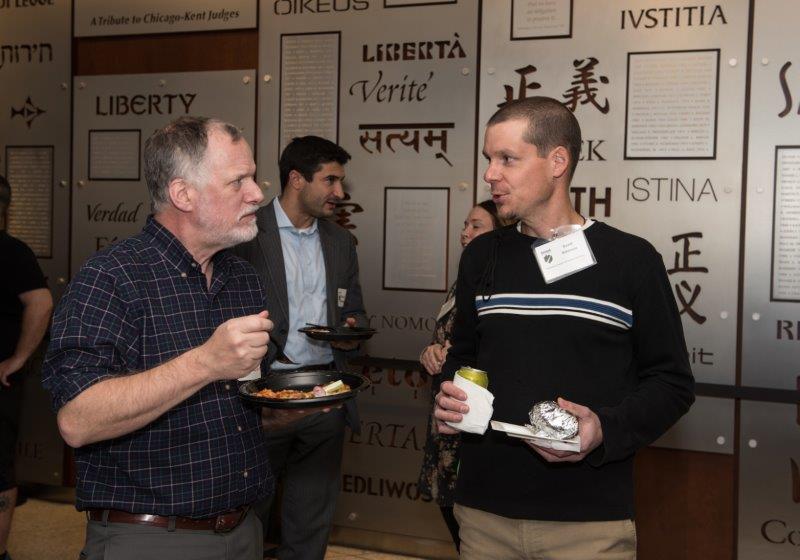 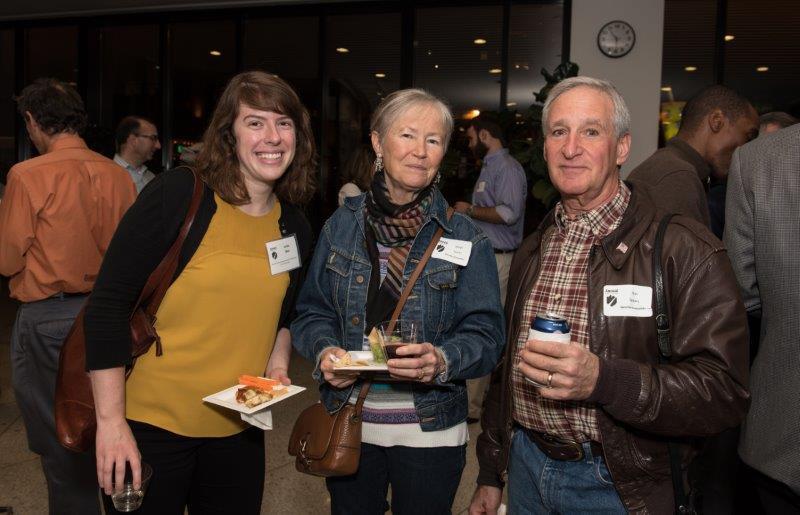 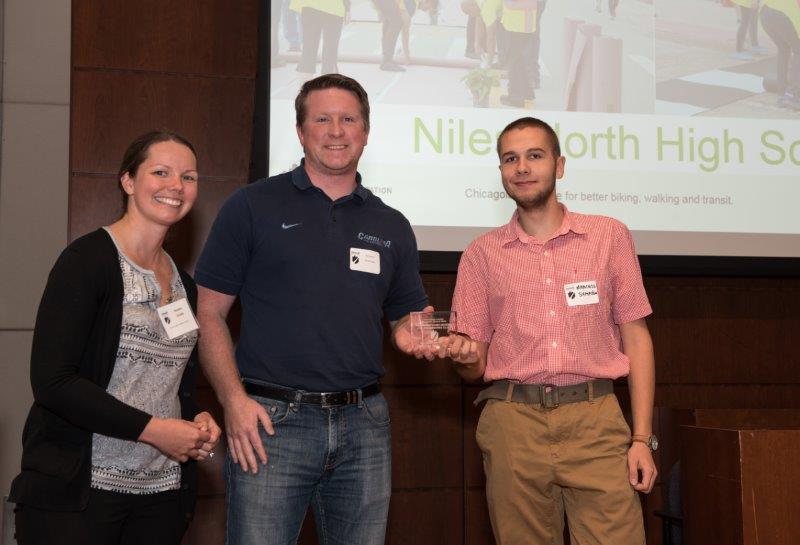 Niles North High School civil engineering class (middle and right) gave up an entire afternoon of class to learn about Complete Streets, help us build out Skokie’s tactical urbanism demonstration project, and help us collect data while the installation was open.

They were an absolute joy to work with and we could not have put down the hundreds of cones, plants, and 3000 feet of tar paper without them. 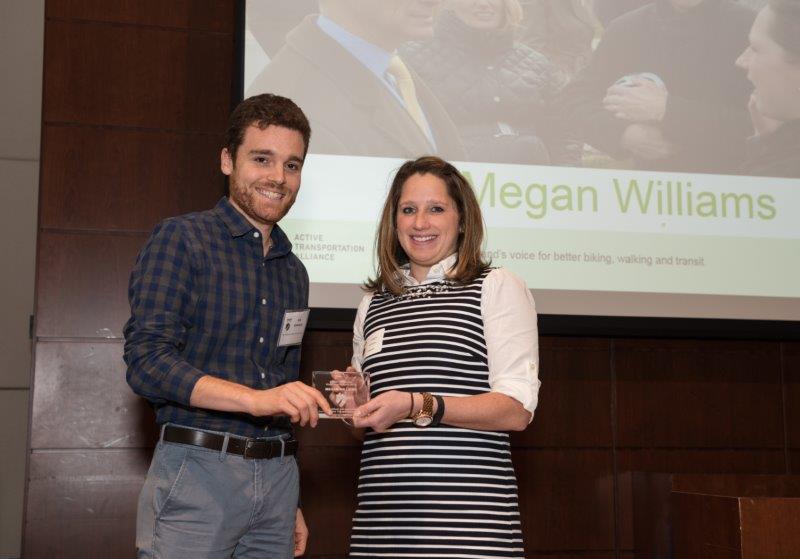 Under the Radar Award: Megan Williams

We worked with Lakefront Trail crash victim Megan Williams to call for separating the trail for people biking and walking at park district budget hearings and in local media over the last two years.

Williams was jogging on the trail while training for her first Chicago Marathon in 2014 when she was suddenly struck by a bicyclist. She learned Active Trans was advocating for trail separation and approached us looking to help. 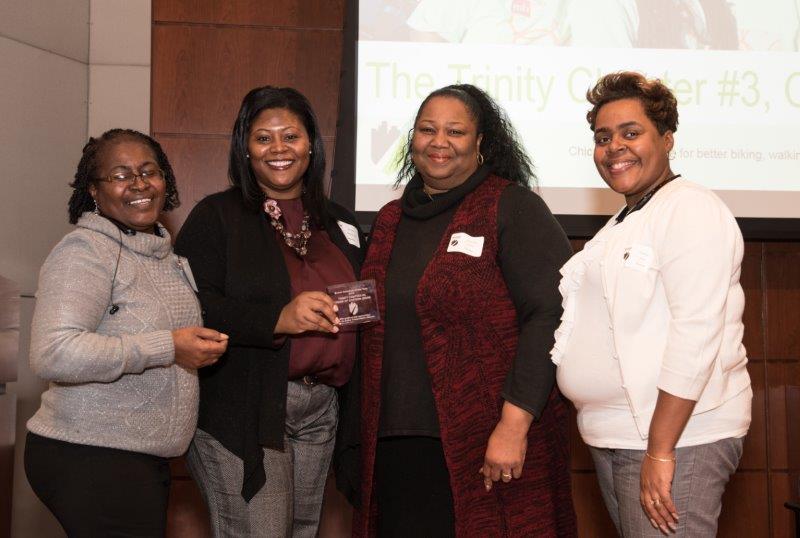 Event Volunteer of the year: The Trinity Chapter #3, Order of Eastern Stars

The Trinity Chapter #3, Order of Eastern Stars supported our work by bringing groups to the last three years of Bike the Drive, this year's Bike Commuter Challenge and the Kickstand Classic. Their enthusiasm and eagerness to help contributed to the success of these events. 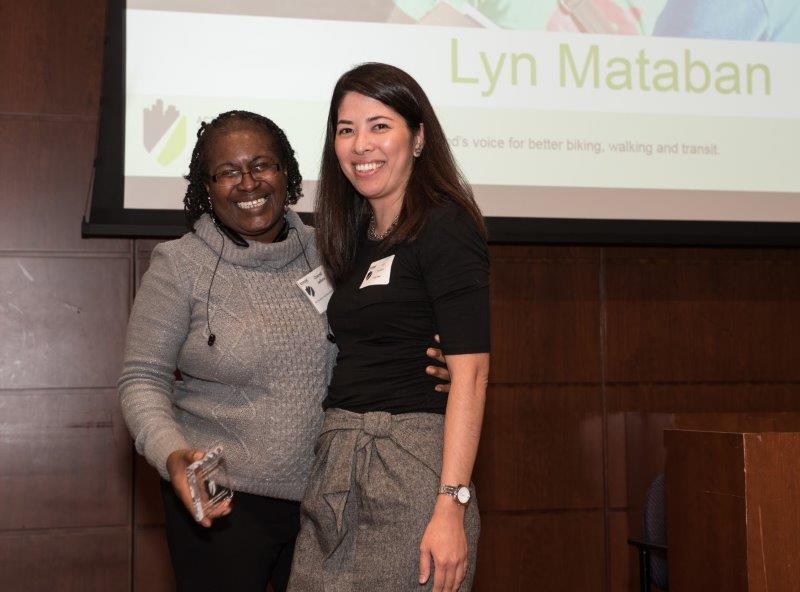 Lyn Mataban (right) has helped out on numerous volunteer nights, she volunteered during Bike Commuter Challenge, Bike the Drive and Kickstand Classic! She is well known for her enthusiasm, commitment and dedication to perform whatever task we put before her. 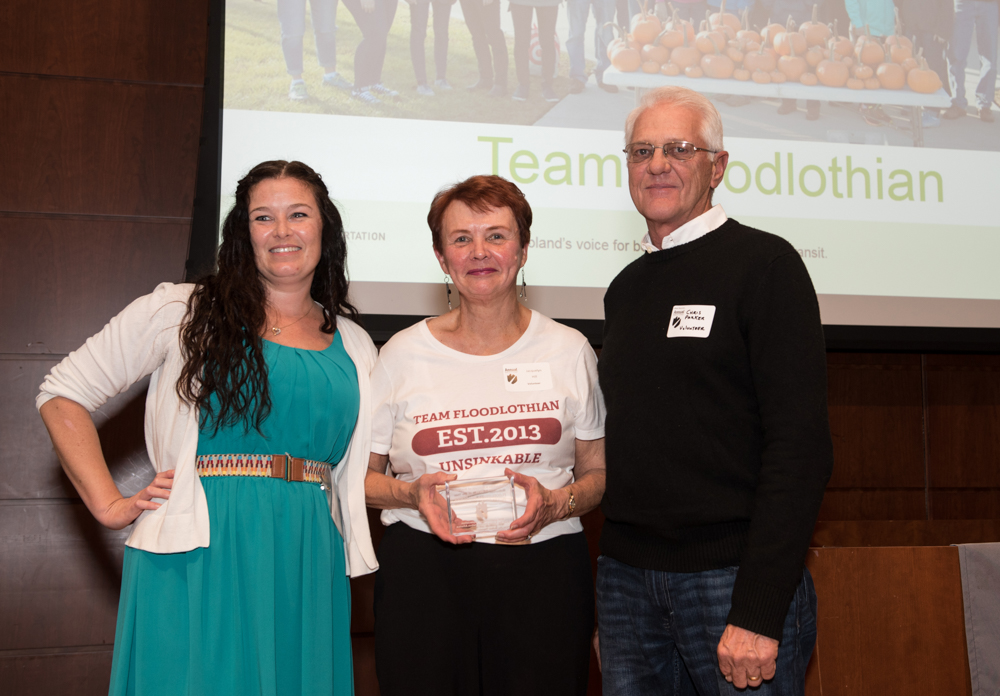 Team Floodlothian (middle and right) has assisted in the development and implementation of the Midlothian Complete Streets policy. They also helped with securing an $8 million grant to prevent flooding and are pushing for bicycle and pedestrian facilities to be included in the project. For our tactical suburbanism project, they secured attendance from local businesses and volunteers, and ultimately got more than 130 participants to attend. 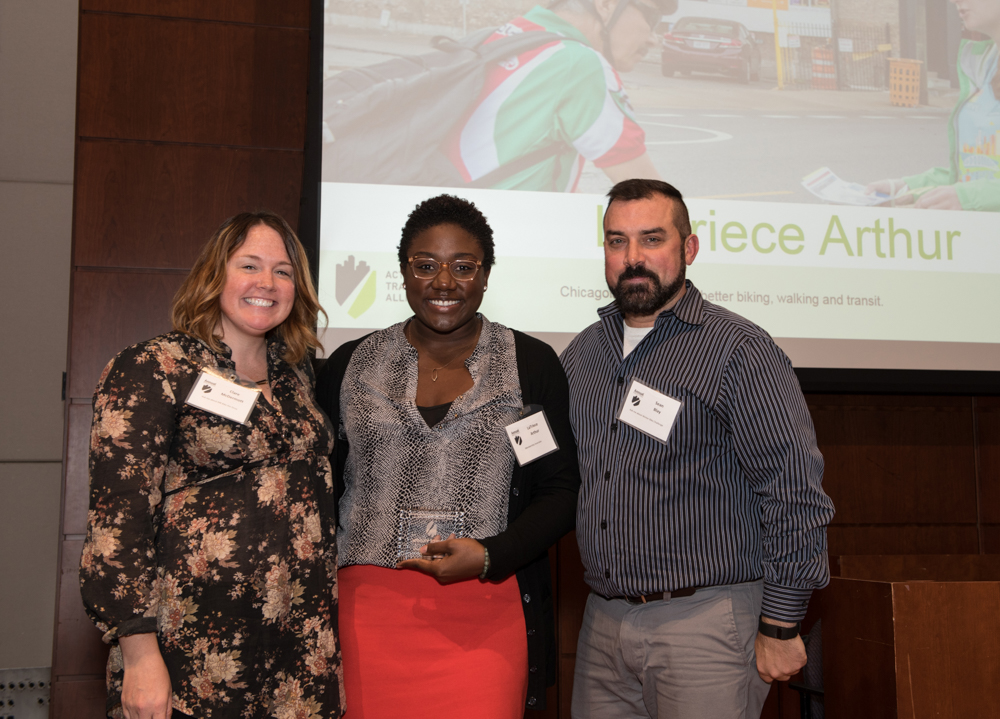 LaTriece Arthur (middle) is eager to jump in whenever we need an extra set of hands. From early morning wake up calls to help with a pit-stop during Bike Week, to managing day-of registration at our new event, Kickstand Classic, she’s been an important asset for Active Trans. She’s a Membership Associate and Events Committee member.