Making one of the city’s crown jewels safer for everyone 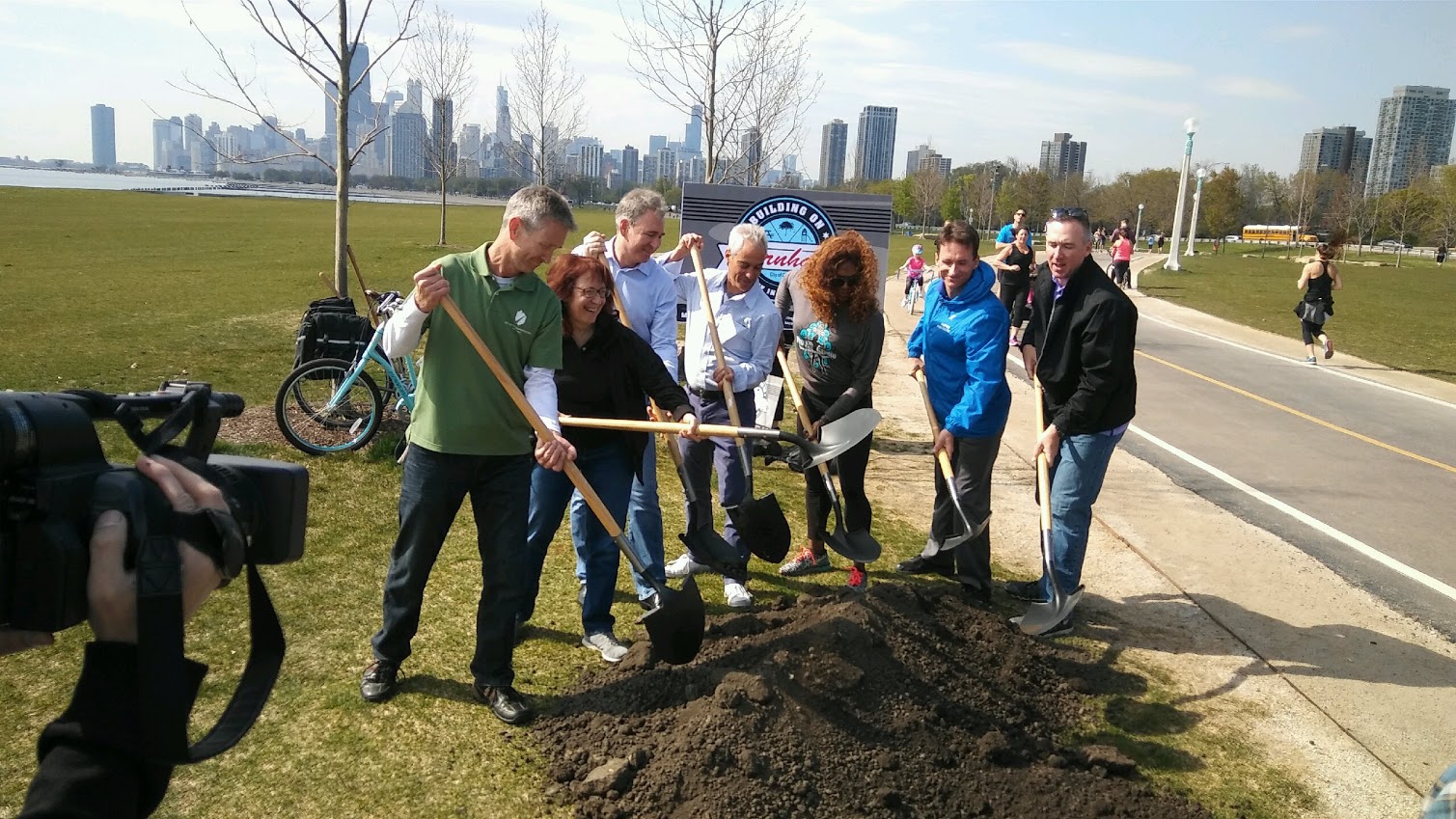 Saturday’s groundbreaking on the Lakefront Trail was a great moment for everyone who enjoys one of Chicago’s most beloved — but extremely congested — public spaces.

For Saturday’s event, I joined Mayor Rahm Emanuel, local philanthropist Ken Griffin, Chicago Park District Superintendent Michael Kelly, Alderman Michelle Smith and others to mark the beginning of a project that will create separate trail spaces for people biking and walking on the Lakefront Trail between North Avenue and Fullerton (see photo).

On May 22, this section of the trail will be closed temporarily and people will use a detour  (see below for details).

The North Side project is part of a larger plan by the Chicago Park District to create separate paths along the full length of the 18-mile Lakefront Trail by the end of 2018.

This is one of the most congested segments of one of the busiest trails in the U.S. More and more people biking and walking along the lake is great news for our city, but we must continue to invest in trail upgrades to make sure everyone can travel safely.

In coming weeks, the park district will be finishing construction on the trail separation project between 31st and 51st Streets — the first step in creating separated trails on the South Side.

The Active Transportation Alliance and the Chicago Area Runners Association (CARA) are advising the park district throughout the trail separation planning process. The North Side project involves paving a new trail for people biking between Fullerton and North Avenue. Between North and Ohio, the biking and walking paths will be side-by-side with painted buffers on the concrete surface.

The Chicago Park District released these designs for the separation project between Fullerton and North and Oak and Ohio.

Creating a continuous, quality Lakefront Trail has been one of Active Trans’ top priorities since our founding more than 30 years ago. Over the years, we’ve conducted studies on trail usage, we’ve issued reports on improving the trail and we’ve highlighted the terrible crashes that occur on the trail due to congestion. In 2014, more than 1,700 people signed our petition to the Chicago Park District in support of trail separation.

When the trail section between Fullerton to North Avenue closes for construction on May 22, people will be directed off the trail between Diversey Parkway and North Avenue to marked detours through Lincoln Park. There’s enough surface concrete between Oak and Ohio for that trail segment to remain open during the construction period. Look for construction updates on the park district’s Lakefront Trail page.

See a graphic map of the detour.

We recently scouted the Lincoln Park detour and most of the concrete is in good condition, but users should still proceed with caution and bring lights in the evenings. We'll be monitoring conditions and communicating with the park district throughout the construction period, so let us know if you have any feedback.

We’re thrilled to see this project moving forward along the full 18 miles of the Lakefront Trail. Thanks to the commitment by the City of Chicago, the generous donation by Ken Griffin, and long term efforts by Active Trans and other advocates, one of Chicago’s most treasured resources will be safer and more welcoming to everyone — no matter if you’re on foot or riding a bike.