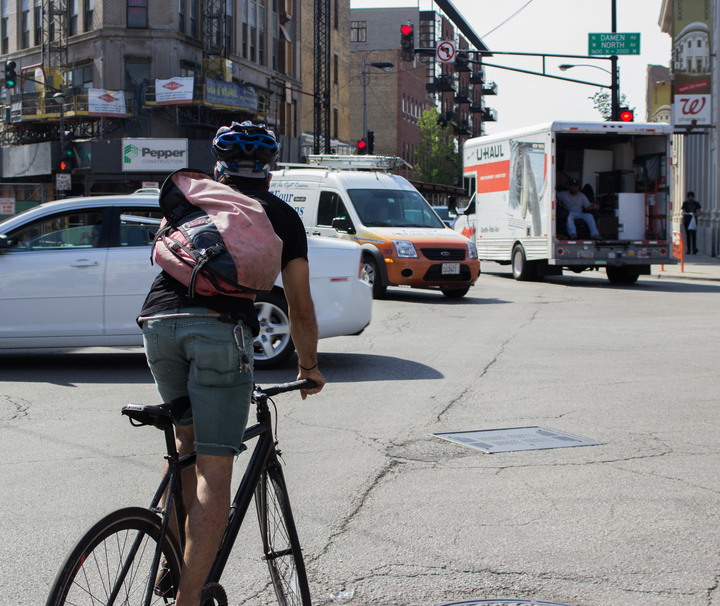 In 2017, Active Trans will shine a spotlight on a several Chicago streets in need of improved biking, walking, and transit options. First up: North Milwaukee Avenue in Wicker Park.

Milwaukee Avenue on Chicago’s Northwest Side is one of the busiest streets for biking in the entire country. During peak months, as many as 5,000 people a day bike along the street, often surpassing the level of motor vehicle traffic at rush hour.

Despite this overwhelming demand for biking on Milwaukee, conditions through the heavily trafficked Wicker Park corridor are still abysmal for people traversing the area on two wheels.

Since 2013, Active Trans has asked the city to follow through on the vision established in the Streets for Cycling 2020 Plan: to build a high-quality Spoke Route along Milwaukee, extending from downtown to the city limits on the far Northwest Side.

In order to serve all ages and abilities, the Milwaukee Avenue Spoke Route should include physically protected bike lanes, including through the Wicker Park corridor.

While impressive progress has been made extending the Spoke Route north from downtown, momentum seems to have stalled over the past several years.

This new infrastructure is a big improvement over previous conditions and reflects the type of low-stress bike route we’re advocating for through our Bikeways for All campaign.

However, for the thousands of people on bikes who continue north beyond Division, the abrupt transition from new high-quality bike lanes to…well…nothing at all creates a stressful pinch-point along a key bike route.

Its time to get serious about making the long overdue improvements for people biking through Wicker Park on Milwaukee Avenue.

That’s why a new idea being floated by a local business improvement organization is so exciting.

This recommendation gives advocates a great foothold to build upon. Active Trans will continue to campaign for permanent improvements for biking and walking in this corridor, including pushing for physically separated protected bike lanes.

The WPB Master Plan includes a quite a bit more than just ideas for bike lanes on Milwaukee Avenue. For active transportation advocates, there is a lot to like: improved access to transit stations, addressing safety issues at high-crash intersections, and extending the 606 east to the Chicago River.

We commend WPB SSA for continuing to lead the way on advocating for sustainable transportation and safe streets.

Active Trans will continue to campaign for improvements to Milwaukee Avenue, one of the most critical links in our active transportation network. Stay tuned for more updates and opportunities to support this work by signing up for our advocacy alerts.