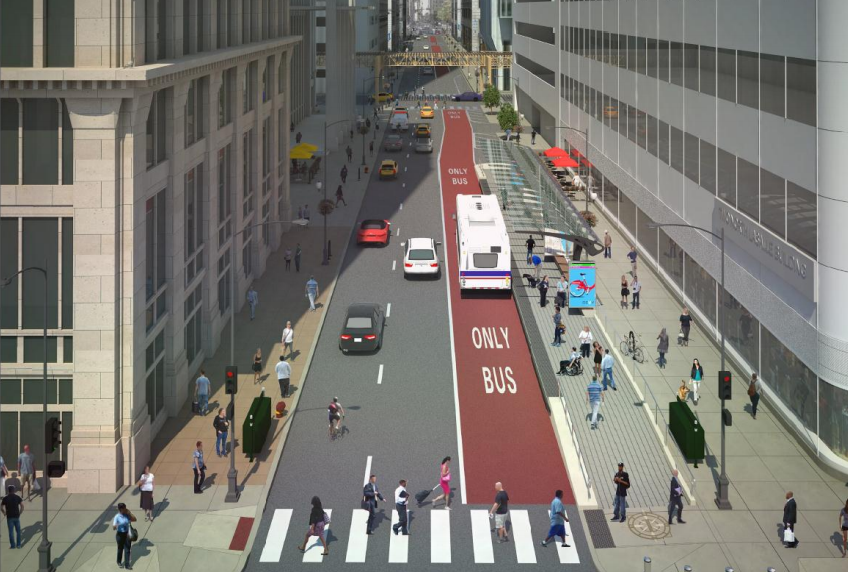 The challenge of moving east or west across the Loop is familiar to anyone who has ever battled the daily congestion downtown, particularly during the morning and evening rush.

A new rapid transit corridor is designed to make those trips faster, safer and more convenient, whether you're walking, riding your bike or riding transit.

The Chicago Department of Transportation (CDOT) and Chicago Transportation Authority (CTA) unveiled the branding for the Loop Link Monday, and released a construction schedule for the new rapid transit corridor scheduled to be completed in 2015. Features include dedicated bus lanes on Washington and Madison, and connections to Ogilvie and Union Stations in the West Loop, as well as improved space and safety for people walking and riding bikes.

You can see maps and images here and more details here in these materials from the city agencies.

Construction is scheduled to begin March 16th and prep work is already underway. We’ll continue to advocate for CDOT and CTA to efficiently proceed with construction so the corridor is operational as soon possible, and work to ensure the final project delivers the results promised to people riding transit, walking and riding bikes across the Loop.

I recently spoke with transit riders from neighborhoods throughout Chicago about the project and what they’re hoping to gain from it. We’ll incorporate this feedback into our continued advocacy for downtown transportation improvements. Contact me to add your own thoughts.

Ian Adams, 29-year-old Ukrainian Village resident who works in the Loop
“Getting to the Loop is pretty straightforward but transit within the loop is really lacking. I’ll likely ride the bus more often with the new corridor and ride my bike in the new protected bike lanes when the weather is good. I’m in business school in Streeterville and need to get across the Loop in the evenings when the streets are totally jammed.”

Ian Magargee, 31-year-old Lakeview resident
“The only way to get more Chicago residents to take public transit is to make it faster and less congested. I used to live in New York City and when I lived there I felt like no neighborhood was off limits to me. That’s what I want to feel like in Chicago.

Joe Olson, 25-year-old engineer from Bucktown
“I work a block away from the new corridor and nine times out of 10 I just walk east-west because the buses go so slow. It will also cut down my travel time considerably when going to the lakefront parks or the West Loop.”

Matt Carley, 27-year old Lakeview resident
“I frequently travel to Ogilvie and Union Stations to ride Metra to the suburbs to visit family and friends and the dedicated bus lanes will save me time. I don’t have a car and rely on public transit and my bicycle to get around and truly experience the city.

Above images courtesy of the CTA.