Home / Blog / Longtime supporter has made her mark on local cycling

Longtime supporter has made her mark on local cycling 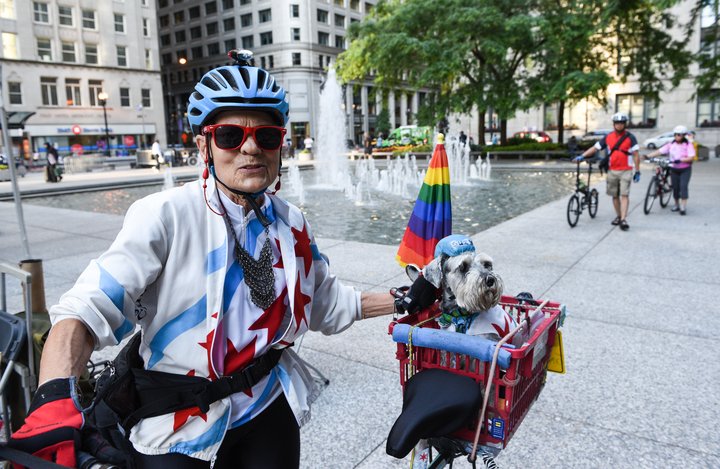 Even if you don’t personally know Kathy Schubert, there’s a good chance you’ve seen her riding around Chicago or volunteering at an Active Transportation Alliance event.

That’s because she not only puts on a lot of miles during the year — 6,000 is her record — but you tend to get noticed when you bike around town or across entire states with a miniature schnauzer riding in your basket.

Suzy, her former riding companion, isn’t Schubert’s only claim to fame however.

For the past 20 plus years, Schubert (pictured) has been an active commuter, enthusiastic recreational cyclist, and a staunch advocate for safety. She is a founding member of the Chicago Cycling Club, joined Active Trans when it was still the Chicago Bicycle Federation, and is a lifetime member of both the League of American Bicyclists and Adventure Cycling Organization.

When asked why she supports these organizations, Schubert responded simply, “Because they represent us and they create a louder voice than we have as individuals.”

Even with that ground support, Schubert has no problem addressing matters head on, especially when they involve the safety of other cyclists. To raise awareness about the difficulty of bicyclists crossing Lake Shore Drive between Queen’s Landing and Buckingham Fountain, she rented a queen costume and sent out press releases to the local media.

Another seminal moment came in 2001 when she was riding across the LaSalle Street Bridge. While crossing she slid and fell on the metal grating, a mishap that sent her to the emergency room. When she got out, she started a petition and handed out postcards addressed to the Chicago Department of Transportation, asking for bridge surface improvements.

Undeterred by the lack of an initial response, Schubert was gratified to see the first set of plates go on another bridge three years later. She knows that hers was one of many voices urging better bike infrastructure, but the fact that some people colloquially refer to them as “Kathy plates,” speaks to the important role she played in generating and sustaining engagement for safer streets.

In addition to advocacy, Schubert has done a lot to support the cycling community. For the past few years she has sponsored the t-shirts handed out to attendees at Active Trans’ Bike Week Rally and volunteered to take care of volunteers during Bike the Drive.

“I was the first person to be in charge of volunteer accommodations, delivering refreshments to people who were not by an aid station,” Schubert explained. “I would fill my trailer with water and fruit and deliver it throughout the course. I’ve never been one to stand; I like to move when I volunteer.”

The day before Memorial Day, however, isn’t the only time during the year that Schubert loads up her bike. She takes public transit when it’s icy out and makes occasional car trips out to the suburbs to see family, but when it comes to the city, her bike is her main method of getting around, no matter what she needs to schlep to and fro.

“I like being able to hop on my bike and go where I need to go,” Schubert said. “There’s always something to lock it to. A car is more trouble than its worth, having to drive around the block [looking for parking], feed a meter. I’d rather use my bike to go downtown. It’s just so easy and you don’t have to worry about where the bus stop is because you have the bus stop with you.”

Having logged thousands of miles over the years and completed 18 RAGBRAI rides and toured places as far away as Israel and Australia, Schubert has some sage and surprisingly practical advice for anyone considering spending more time on two wheels.