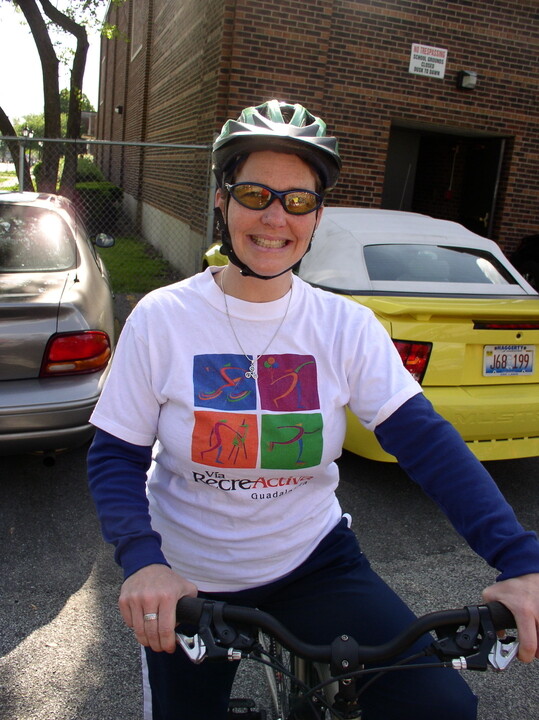 2021 marks a historic milestone for the Active Transportation Alliance. The nonprofit celebrates its 35th anniversary this year in leading the charge to create a sustainable transportation landscape in Chicagoland that emphasizes safety and health.

Active Trans has come a long way since it was founded in 1985 as the Chicagoland Bicycle Federation by a small group of advocates looking for ways to make bicycling safe and easier. Over the next 23 years, CBF grew into one of the largest and most prominent bicycle advocacy organizations in the country. In 2008, the organization took an important step forward by expanding its mission to include pedestrian and transit advocacy. As a result, it changed its name to Active Transportation Alliance.

Longtime Deputy Executive Director Melody Geraci has seen for herself how Active Trans’ evolution into a multimodal advocacy organization has not only improved conditions for walking, biking, and public transit in the region, but also paved the way in helping to create thriving, vibrant communities.

Since she joined the organization 16 years ago, Geraci has been on the front lines championing sustainable transportation infrastructure and policies that create opportunities for people to travel safely, actively, and enjoyably.

As Active Trans prepares to celebrate its 35th anniversary, we caught up with Geraci to learn about the nonprofit’s major accomplishments over the years, including how it has been able to nimbly pivot to address the most pressing issues of the moment as part of its mission.

How did you get interested in sustainable transportation advocacy? How did you make your way to working at Active Trans?

It was something of a fluke, honestly. In 2005, I was looking to leave a job that wasn’t a good fit and applied at the then Chicagoland Bicycle Federation for a project manager job and somehow was hired. It’s one of the things I love best about Active Trans — that the majority of our staff don’t have a direct background in transportation. I think it makes our advocacy more holistic and relevant to the public.

What are your duties and responsibilities as deputy executive director? What’s your favorite part of the job?

One of my colleagues once described me as “the Swiss Army Knife” of the organization. Over the years, I’ve worked on a little bit of everything: education programs, policy advocacy, coalition building, grant writing. As deputy director, I serve a sort of chief-of-staff role, including operations, contracts, and [human resources].

Active Trans was an early adopter of a multimodal mission back in 2008, well ahead of many of our peer organizations. In my opinion, that was the watershed moment in defining our future and our success. It not only broadened our ability to relate to people who walk and ride transit and the communities that most depend on those modes, it also accelerated our pace toward embracing intersectional issues, like access to jobs, housing, and services.

What are some of Active Trans’ historic achievements or impact that it has delivered over the last 35 years that you’re particularly proud of?

A lot of people would point to milestones, like our role in allowing bikes on Metra trains, hosting Chicagoland’s first-ever Open Streets events, and paving the way for Divvy bike share. For me, I am deeply proud of some of our behind-the-scenes, less visible accomplishments, like producing the region’s first Complete Streets pop-up demonstrations, writing over 100 pedestrian and bicycling plans and policies for regional communities; and hosting the Crash Support Program for anyone involved in a crash while walking or biking. 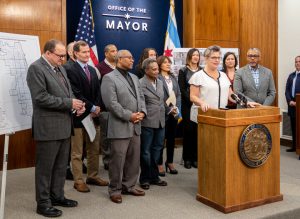 What are some of the current Active Trans projects that you are particularly excited about working on?

Our current technical assistance work has us partnering with communities like Peoria, Carbondale, and soon far-southern Illinois towns, like Cairo. It’s so fulfilling to engage with and learn from new people and places. In Murphysboro, Illinois, among other projects, we are helping develop a “Walk of Fame” that will honor local celebrities, past and present, by placing a marker on the sidewalk along a walking route.

Over the past year, COVID-19 has affected sustainable transportation while the movement for social justice and racial equity has gained momentum. How has Active Trans pivoted to address these issues as part of its work and mission?

I’ve never been prouder of our team as I have been over the last year. When the pandemic hit, we immediately re-centered our work on three priorities: public health, essential travel for essential workers, and the impacts on the hardest-hit communities. And this shift has had profound impacts in bringing transit rescue funds to the region, ensuring that transit workers and riders have the protections they deserve, and keeping bike shops open during the shutdown.

How does walking, biking, or public transit play a role in your life? Any favorite places to bike or walk?

I’ve lived in the South Shore neighborhood of Chicago for 17 years now, and there’s no shortage of hidden gems to visit by walk, bike, or transit. I’m incredibly lucky to have a Metra Electric station and three express buses to downtown within a mile of my home. And I can hop on a Divvy bike to Steelworkers Park in South Chicago, which has become a favorite chill spot.