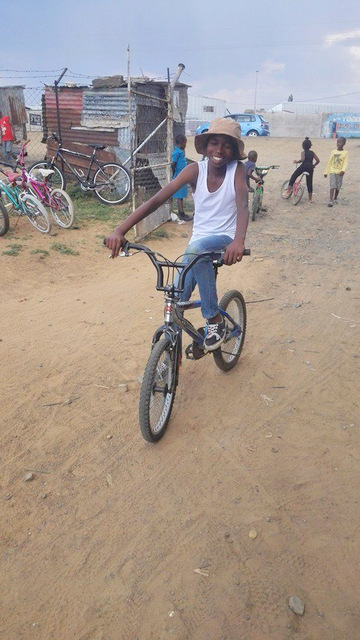 A shipment of 140 bikes recently arrived for children in the African nation of Lesotho thanks to a local nonprofit and support from employees at a local bike-friendly engineering firm.

Until 2012, there were no virtually no bikes in Lesotho, a relatively small mountainous nation that is completely surrounded by the country of South Africa.

A great tragedy in Lesotho is the number of people afflicted by HIV/AIDS. According to recent estimates, the prevalence is one of the highest in the world.

Out of a population of nearly 2 million, the country is home to some 100,000 orphans due to HIV/AIDs.

Several years ago a couple of Chicago-area friends — Dave Gorman of Lombard and Jeff Teppema of LaGrange Park — decided they wanted to help bring bicycling to kids in Lesotho.

Since then, they’ve been working with the local nonprofit Working Bikes, slowly filling up shipping containers with bikes bound for kids in Lesotho.

As part of its 2015 Commuter Challenge Bike Week activities, Christopher Burke Engineering pledged to match the commuter payout for the month of June 2015 to support the program called Bikes for Lesotho.

The firm, which is located in Rosemont, pays each employee 75 cents per mile biked during his or her commute. The initiative has been a huge success: since 2006, 150 employees have ridden more than 284,000 miles.

For the Lesotho fundraiser, Burke employees churned out almost 5,000 miles to raise $3,500, which covered the cost of delivering 140 bikes to children in Lesotho. The bikes just recently arrived (see photos).

“Hearing about the great work that Bikes for Lesotho does for children in Africa really motivated us to rack up the miles,” said Christopher B. Burke, president of the firm.

For years, Burke Engineering has been a model for other businesses around the country that are trying to get more employees to hop on two wheels.

For its efforts, Burke Engineering earned the status of a Platinum-level Bicycle Friendly Business from the League of American Cyclists. The firm is also an Active Trans sponsor and business member.

For more information about Bikes for Lesotho, email Dave Gorman at bikesforlesotho@gmail.com or connect on Facebook.

Photo courtesy of Bikes for Lesotho.