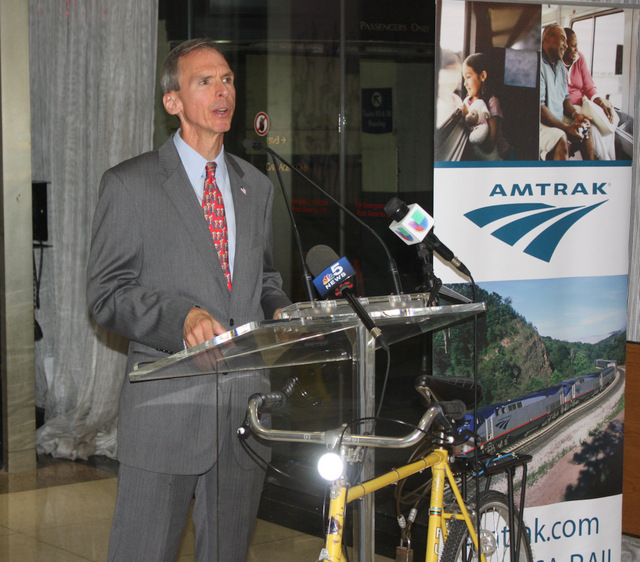 At our 30th Anniversary Soiree on February 22, Active Trans will be giving U.S. Rep. Dan Lipinski our Extra Mile Award for his continued support for cleaner, healthier transportation in the region.

Among his recent accomplishments are reinstating a national commuter tax benefit and playing a key role in passing a new transportation bill.

Lipinski grew up in the same district he now governs, which includes parts of the southwest side of Chicago, southwest Cook County, and northeastern Will County. He and his wife, Judy, reside in Western Springs.

Recently, we had the opportunity to talk with the Congressman about his role in passing the national transportation bill and his commitment to better transportation options.

Active Trans: Transit riders throughout the nation rejoiced when you and Rep. King successfully increased and permanently extended the commuter tax benefit. Why is that legislation important to you?

Lipinski: Each rider on Metra, CTA, and PACE means one less car on the road, which alleviates congestion, diminishes pollution and reduces wear and tear on our roads. And there is no better way of encouraging people to take public transportation than with a commonsense financial incentive.

Unfortunately, we saw the commuter tax benefit cut by nearly half when it expired at the end of 2013, while the parking benefit stayed at its existing rate. With rising fares and tight wallets, it made sense for some commuters to switch to driving when they would have preferred the convenience of public transportation. That’s why I made it a priority for the last two years to not only restore this benefit, but see that it is made permanent so commuters know they can count on it for years to come.

Active Trans: You were a key figure in passing the first long-term federal road and transit funding bill in 10 years. The bill increased funding for transit projects and maintained funding for the Transportation Alternatives Program, which supports biking and walking infrastructure. What does the passage of the transportation bill mean for Chicagoland?

Lipinski: This bill, known as the Fixing America’s Surface Transportation (FAST) Act, is a step in the right direction to fixing the crumbling infrastructure in Chicagoland and improving the economy. It provides growth in funding for transit and highway projects and it will go a long way towards addressing the backlog of deteriorating bridges and roads in our nation. I was also pleased that my priority to keep the Transportation Alternatives Program from being cut was achieved.

Overall, transit does especially well in this bill with strong support for State of Good Repair funding for Metra and a revamped bus program for CTA and PACE. For those of us who have had to sit at a station waiting for a delayed Metra train or have been stuck idling at a blocked grade-crossing, we should be excited that this bill contains two new freight programs that include grade separations and rail improvements as eligible activities.

Please join us as we honor Rep. Lipinski and others at Active Trans’ 30th Anniversary Soirée. Enjoy hors d’oeuvres and beverages during cocktail hour, followed by dinner and an auction.

Active Trans: Active Trans recently joined you for a ribbon cutting at Union Station in Chicago for Amtrak’s new roll-on bike service between Chicago and Washington D.C. (see photo above of Lipinski speaking at the event). Why should Amtrak accommodate people with bikes?

Lipinski: As an avid cyclist, I see tremendous benefits from considering and accommodating the needs of all users, especially passengers with bikes. I worked to add language to the FAST Act that would require Amtrak to consider the needs of cyclists in its station development and boarding procedures. To some, this sounds like just setting up bike racks at Amtrak stations, but it’s more than that. It’s about establishing seamless connections with Amtrak to integrate passenger rail into our transportation system while integrating other modes into the Amtrak system. Accommodating people with bikes can help attract passengers who want to take a trip with their bikes, but wouldn’t be able to without baggage or train car accommodations. I’ve been happy to be able to take advantage of Metra’s Bikes on Trains policy. 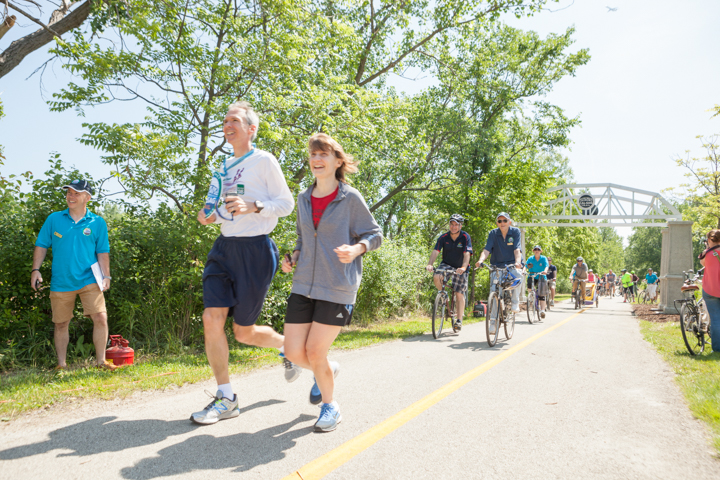 Active Trans: Do you have favorite trails in the Chicago area where you like to run and/or bicycle?

Lipinski: I love to ride the Centennial Trail, which is a paved trail that runs from Willow Springs to Romeoville in between the Des Plaines River and the Chicago Sanitary and Ship Canal. From Romeoville the crushed limestone I&M Canal Trail connects down through Joliet and beyond. All of this lies within my district. Last year I was excited to be part of the ribbon-cutting for the new Cal-Sag Trail [see above] that runs alongside the Cal-Sag Channel and connects with the Centennial Trail in Lemont and with other trails that run into southern Cook County. Now I can tour most of the suburban portions of my district on dedicated bike trails.

Please join us as we honor Rep. Lipinski and others at Active Trans’ 30th Anniversary Soirée. Enjoy hors d’oeuvres and beverages during cocktail hour, followed by dinner and an auction.

A longer version of this interview appears in the winter issue of our quarterly printed newsletter mailed to all Active Trans members. Not a member? You can fix that.