Lime Line would bring rapid transit to West Side 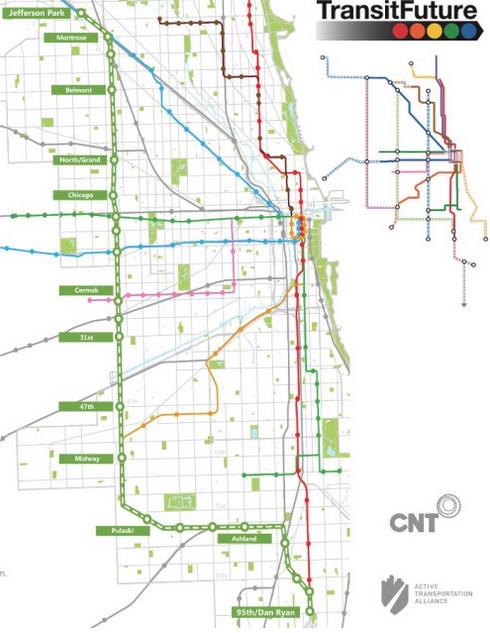 People living on the West Side of Chicago know how difficult it can be to get anywhere on public transportation. Residents who aren’t lucky enough to live near Metra or CTA train stations lack rapid transit options and are forced to rely on local buses.

A majority of the bus lines are on congested streets, causing a 30-minute trip to often take well over an hour.

If you’re looking to travel north or south, it’s impossible to find fast, direct routes that don’t go through the Loop, which adds unnecessary time to your trip.

This is why the Lime Line would dramatically improve travel on Chicago's West Side. It’s one of ten rapid transit expansion projects envisioned by TransitFuture.

The project, which is also known as the Mid-City Transitway, could come in the form of CTA rail or bus rapid transit (BRT). It's been talked about for decades.

The north begins at the Jefferson Park Blue Line station, and proceeds south on Cicero Avenue to Midway, turning east towards the 95th/Dan Ryan Red Line.

The line would link to Blue, Green, Pink, Orange and Red lines along with two Metra stations, CTA and Pace BRT/ART routes, and 23 community areas – greatly expanding South and West Side access to the entire rapid transit network

Traveling from the North Side to the South Side on Cicero Ave. is often a hassle, given that people have to transfer from the #54 to #54B if they plan on traveling anywhere south past Cermak.

The Lime Line would provide a straightforward, faster option compared to the current local buses.

If you live along the proposed Lime Line, please sign our petition to tell Cook County leaders to invest in rapid transit expansion.

The Lime Line would also help many low-income residents living in transit deserts get to their jobs on time by cutting down their commute time, and bringing more economic stability to their lives.

If we are in the midst of building a new Chicago, expanding rapid transit throughout the city is a vital step in bringing transportation equity to areas that need it the most.

To explore other proposed expansion projects, check out TransitFuture’s vision for a better Chicago.

This is the seventh post in our 10 lines, 5 weeks blog series. Each week from now until Labor Day, we’ll take a look at two lines in the Transit Future vision and make the case for why the county board should take action to expand the rapid transit network in Cook County.