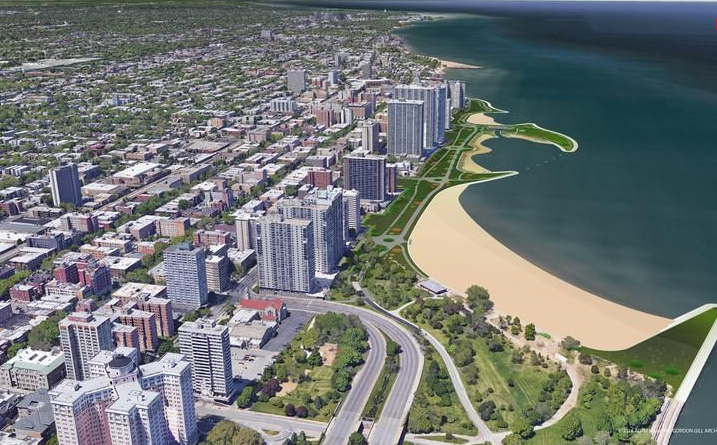 UPDATE (9/9/16): The Edgewater Beachwalk referendum has been removed from the ballot in the 48th and 40th wards after the Board of Elections found many of petition signatures were forged. We'll continue to look for ways to support extending the trail both north and south as work on the lakefront moves forward. This blog post has been updated to reflect this.

Support for extending the Lakefront Trail north to West Devon Avenue has gained traction in Edgewater.

The community-led proposal, known as the Edgewater Beachwalk, would create separated trail space for people walking and biking from West Ardmore Avenue – the current terminus of the Lakefront Trail – to Devon. Along this stretch would be new beaches, parkland, a boat dock and a dog park.

In Active Trans’ three decades of Lakefront Trail advocacy, we’ve long supported the Last 4 Miles Initiative, a campaign led by Friends of the Parks to add two miles of parkland to both the south and north lakefronts so all Chicagoans have access to our lakefront. This proposal covers an initial segment on the north end.

Read more about the proposal and see additional renderings in Curbed.

Funding remains a major obstacle. Given the city’s financial constraints, any project of this scale would likely require private or federal funding.

Parkland existed on this stretch before the Lake Shore Drive expansion of the early 1950s led to its demolition. A group of local advocates from the neighborhood’s bicycling, senior, disabled, black and gay communities led by Edgewater resident Morry Matson have organized support for the proposal over the last few years.

We were dismayed to hear about the very troubling news about forged signatures in the support of the ballot initiative. While this ballot initiative is rightly off the table, we hope to see more local advocates take up the Last 4 Miles cause and make the case for additional investment to elected officials.

Over the next several years we’ll need to upgrade trail infrastructure and parkland all along the lakefront to meet the growing demand for safe and convenient access.