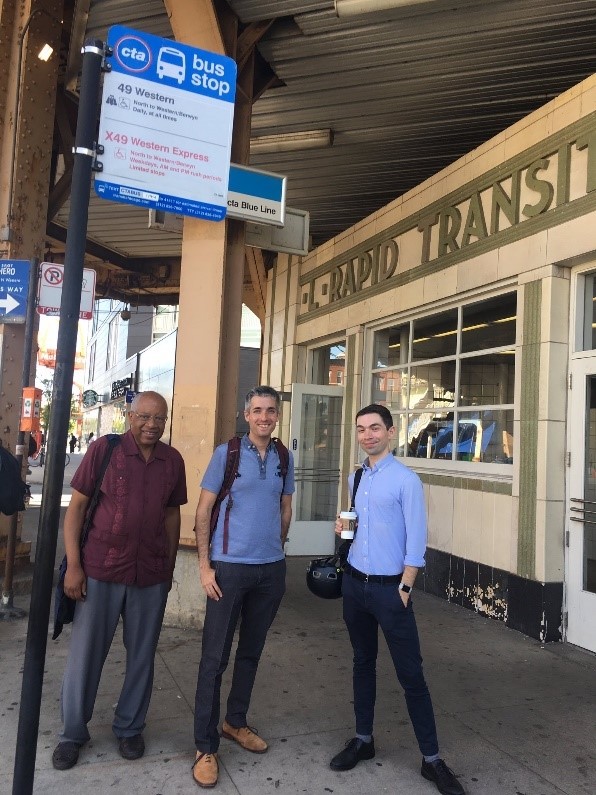 To bring attention to the sluggishness of traveling by bus on Chicago’s streets, Active Trans is inviting aldermen on bus rides in their wards. Because, what better way to show elected officials the problems with Chicago bus service than getting them on a bus?

That’s what we did with 1st Ward Ald. Daniel LaSpata.

While we were thrilled to spend some time with this newly elected alderman, he didn’t need convincing that the city is desperately in need of faster, more reliable bus service.

Indeed, bus ridership in Chicago fell a staggering 21 percent since 2012 and much of this drop happened on the city’s busiest routes, like #49 Western, which cuts through LaSpata’s ward. Needless to say, slow and unreliable bus service is causing would-be riders to consider other options that are less healthy, sustainable, and equitable.

Fixing this problem requires elected officials stepping up and working with transit agencies to give buses priority on city streets. Features like dedicated bus lanes, traffic signal priority, and faster boarding speed up service and bring people back to the bus.

LaSpata agrees and knows the bus service in his ward leaves a lot to be desired. The 1st Ward received the letter grade of a “D” on Active Trans’ Bus Friendly Streets Report Card for speed and reliability.

LaSpata knows it’s going to take some work to improve bus service on Western Avenue and across Chicago’s Northwest Side. But he’s committed.

As someone who doesn’t drive and primarily bikes and takes transit around the ward, LaSpata was eager to join the bus ride. We rode the Western Avenue express route (#49X) northbound on a Wednesday morning and then took the Western Avenue local (#49) back to his ward office.

Here’s what he had to say during the ride about prioritizing bus service on the streets of the 1st Ward.

Fortunately, there are bus improvements coming to Western in his ward. LaSpata worked with the Chicago Transit Authority and Chicago Department of Transportation to spread the word about rush hour bus lanes, transit signal upgrades, and bus loading pads that are coming to this part of Western. (Just like the 1st Ward, Western received a D grade on our Bus Friendly Streets Report Cards).

In addition to the transit improvements needed in the ward, LaSpata said upgrading the ward’s network of protected bike lanes is also a top priority so people of all ages feel safe and comfortable riding on the street.

In order to get our buses moving on Chicago’s streets, we need more dedicated bus lanes, priority at traffic signals, and faster boarding. If this sounds like a step in the right direction, consider sending a message to your alderman and the Mayor.

Check the grade your ward received on our Bus Friendly Streets Report Cards and stay tuned for future blog posts featuring bus rides with other aldermen.