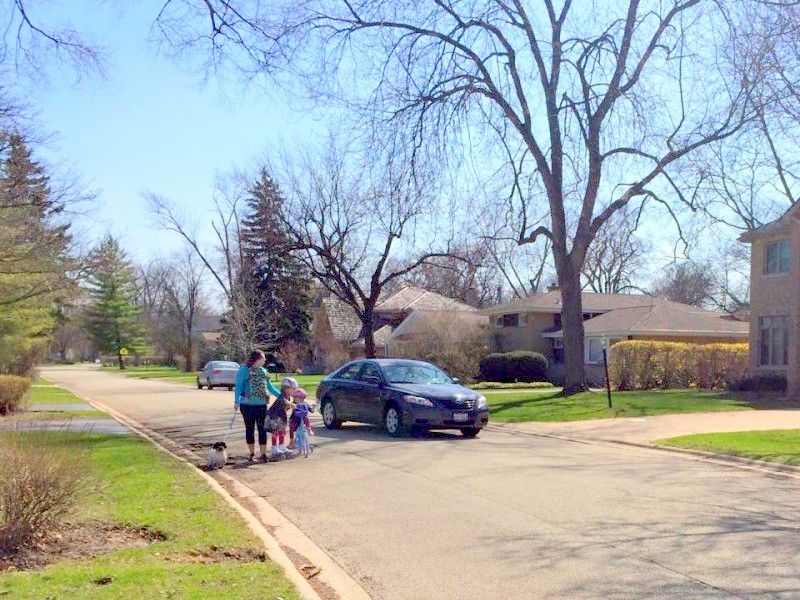 A lack of sidewalks in residential areas surrounding Avoca West Elementary in north suburban Glenview creates a significant barrier for students wanting to walk and bike to school.

Many parents prefer driving their kids to Avoca West, viewing it as the safer option.

But that’s not a good solution if you want to see your kids getting more active, says the Avoca Area Pedestrian Safety Committee, an active group of parents.

For years, the group has advocated for better pedestrian infrastructure near the school.

An on-going struggle they face is getting buy-in from some community members living in proximity to Avoca West. A group of homeowners have various objections on installing sidewalks, but none that hold up to scrutiny.

Some people argued sidewalks would be a safety hazard in the neighborhood because homeowners can’t see kids when backing out vehicles from driveways, while others worried about property values going down.

“I can’t believe…we have to put up such a fight to bring in safe measures for kids to go to school in an area where they have resources,” said Betsy Harootyan, an Avoca West parent and Northfield resident.

The lack of sidewalks isn’t the only concern for parents.

Avoca West sits just west of the Edens Expressway. Roads are busy and congested, making it difficult for people using crosswalks at the on-ramps and exit ramps.

There are no safe, direct routes to the school, but this hasn’t stopped Harootyan from promoting biking in her community. She started doing group rides to school with neighborhood kids, taking longer, indirect routes that were safer.

Avoca West sits in a school district with students from different villages. Harootyan and some parent advocates find it hard getting thier voices heard among opposing homeowners. Although they don’t live in Glenview, their kids are still using the city’s roads and have to deal with the effects of incidents on those streets.

Regardless of the barriers the parent-safety committee faces, it continues advocating for sidewalks near Avoca West by attending community meetings and doing outreach with elected officials.

They also have an active Facebook group and blog highlighting the importance of making communities more walkable.

There are many areas in Illinois that don’t have safe environments for kids walking and biking. The Illinois Department of Transportation’s Safe Routes to School grant program could provide these communities with the resources needed to build sidewalks kids can use to access schools safely, but due to budget cuts, this isn’t the reality.

Learn more about the Safe Routes for Healthy Kids Campaign to increase funding for the Safe Routes program and make administrative changes to make it easier for communities to apply. Sign onto the campaign here! Use the hashtag #SafeRoutesIL to share your story on social media.