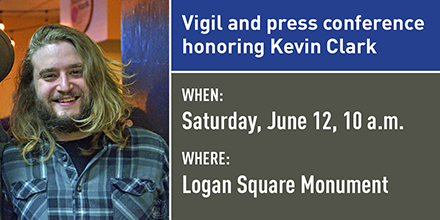 The family of Kevin Clark is hosting a vigil and press conference on Saturday, June 12, at 10 a.m. at the Logan Square Monument. Kevin was tragically hit and killed in May while riding his bike near Logan Boulevard and Western Avenue.

Speakers will remember Kevin’s life and legacy and call for improving bicycling safety in Logan Square and neighborhoods throughout Chicago. We will also install a ghost bike memorial for Kevin near the crash site. Kevin was a drummer and music educator well known for his role in the 2003 School of Rock film starring Jack Black.

Attendees are encouraged to RSVP to the Facebook event.

The area around Logan and Western has long been recognized as a treacherous spot for people walking and biking.

In 2018 Active Transportation Alliance worked with the Logan Square Neighborhood Association to develop a suite of community-informed recommendations to improve the intersection, including removing a travel lane for a short segment, adding a protected bike lane, and enhancing crosswalks and lighting.

In 2008 22-year-old Tyler Fabeck was tragically hit and killed while riding his bike through the intersection. Countless other people walking and biking have been hit or nearly hit by cars or trucks at the location, and others avoid the intersection altogether because the safety issues are well-known.

Please join us in honoring Kevin’s life and legacy by pushing for safety improvements at Logan/Western and bicycling safety in neighborhoods throughout Chicago so no family is ever struck by this same tragedy again.

The vigil and press conference will take place in the park at the Logan Square Monument. Supporters are encouraged to arrive on bikes or foot, but street parking is available along Logan Boulevard. The location is close to the Logan Square Blue Line train station and the #56 Milwaukee Avenue and the #76 Diversey bus routes.

Special thanks to Working Bikes for donating and preparing Kevin’s ghost bike memorial.