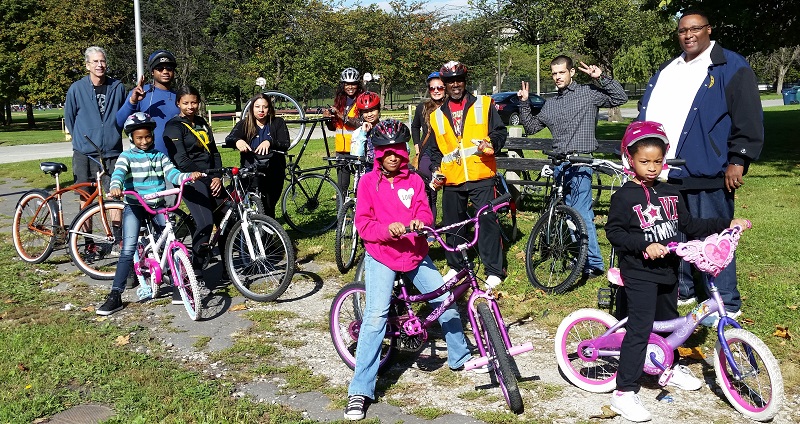 To highlight some of the new streetscape improvements that were made in the 28th Ward — including newly added bike lanes —  Alderman Jason Ervin and Active Trans recently hosted a community bike ride in the Garfield Park neighborhood.

On a sunny Saturday morning, a group of residents and 28th Ward allies gathered with their bikes at the corner of Jackson and Central Park Blvds.

After going over some rules of road safety while a few people tuned up their bikes, the wheels were soon in motion, heading east on Jackson. Residents along the street smiled and waved, happy to see us riding through.

Jackson wasn’t the only street to become friendlier to people biking in the 28th Ward. This year, Alderman Ervin worked with CDOT to install bike lanes on Madison St.

Ald. Ervin supports better infrastructure for biking and walking in Chicago, and support's the city's Vision Zero goal to eliminate all traffic fatalities by 2022.

He worked with CDOT on pedestrian improvements made at the intersection of Madison and Cicero Ave in Austin — one of the ten most dangerous intersections in the city and one location we focus on in our Safe Crossings pedestrian safety campaign.

In August, the city installed refuge islands on Cicero Ave, making it safer for people crossing, and the alderman is working with CDOT on additional refuge islands to be added on Madison in the future.

Active Trans has been working with community organizations on the Westside like Austin Coming Together, the Westside Health Authority and the local CAPS group to advocate for improvements that make our streets safer for everyone, especially people walking and biking who are most vulnerable.

If you live on Chicago's West Side and want to make your community more walkable and bikeable, please join the effort. Contact Cynthia at cynthia@activetrans.org.