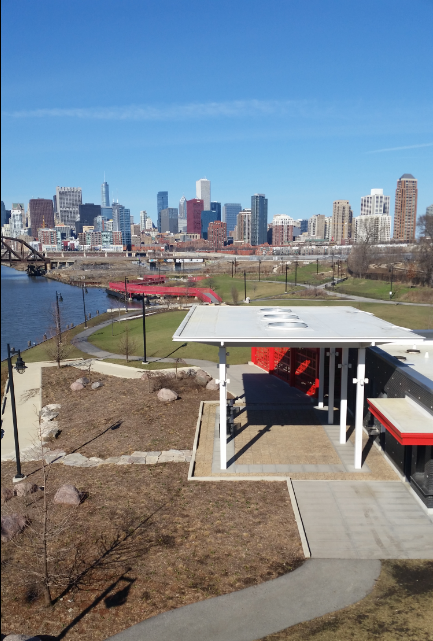 Our plan for a Chicago River Trail is driven by the idea that more Chicago neighborhoods need better access to recreation options and healthy transportation infrastructure.

One of the many neighborhoods in the city that would benefit from a continuous Chicago River Trail is Chinatown.

To get a better sense of the community, I did some exploring in Chinatown with Debbie Liu, a campaign supporter with the Coalition for a Better Chinese American Community.

Chinatown, located on the near south side, has the approximate boundaries of 17th street to the north, 23rd street on the south, State Street to the east and the Chicago River to the west.

First stop was to meet Debbie at the Leonard Louie Fieldhouse (pictured) at Ping Tom Memorial Park. The fieldhouse is an award-winning facility that features a gymnasium, six-lane pool, exercise center and a 3,200 square foot terrace and green roof overlooking Chicago’s skyline.

We’d love to create greater access to the park by strengthening the bike and pedestrian connection between the lake and the river along the West 18th Street corridor.

The park is located on the south branch of the Chicago River and originally was a railroad yard. The park is named after Ping Tom, Chinatown’s highly recognized leader, who worked to expand the neighborhood for Chinese immigrants.

Today, the park has impressive skyline views, a children’s playground and Chinese-inspired landscape elements. During summer, visitors can access the park via water taxis.

Heading north on Wentworth, Debbie showed me the Chinatown Mural, which is made up of 100,000 pieces of hand-painted glass from China. The mural depicts the history of Chinese immigrants in the United States and Chinese philosophies.

Then we arrived at the Chinatown Branch of the Chicago Public Library, a beautiful two-story building with a feng-shui influenced interior design.

This tour reminded me that promoting access to cultural and historical assets is a powerful aspect of our campaign to advance the Chicago River Trail. It's exciting for us to think about the river trail's potential to promote the city’s diversity and connect neighborhoods in an unprecedented fashion.

Do you have ideas about the cultural assets in your neighborhood that a river trail would promote? We’d love to hear from you. Please contact Steve Simmons at Active Trans, 312-216-0472 and steve@activetrans.org.