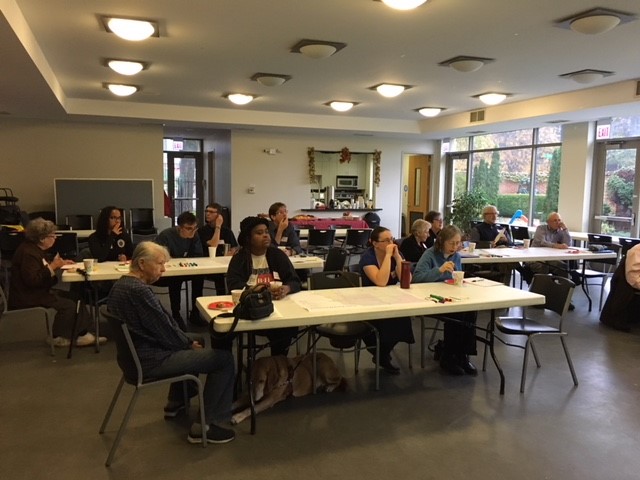 On a recent Saturday morning, residents of Chicago's Hyde Park neighborhood and members of the Hyde Park Kenwood Community Conference gathered to discuss making it easier to get around in the neighborhood. Active Trans was there to facilitate the meeting and provide some background on transportation planning, rules of the road and priority setting.

Nina Helstein, one of the directors of the Hyde Park Kenwood Community Conference, said over the years that her organization has sometimes served the role of creating forums in the community for problem-solving and, as a result, decided to try to do that around this issue because of concerns that residents have.

Early on in their safety committee’s discussions, Helstein said the group learned about Active Trans and our record of success in helping other communities with transportation issues. Our first meeting [with Active Trans] definitely validated our hopes, said Helstein.

Once the discussions at the event were underway, one theme that emerged was the lack of comprehensive planning between the travel modes in the neighborhood. The neighborhood has many one-way streets that are narrow without designated street space for various modes to share the street comfortably. Accessibility to transit and the state of disrepair of the sidewalks and roads were also discussed.

The neighborhood has seen a lot of development in recent years and will potentially be developed further with plans of a new golf course and the Obama Foundation and Library still in their planning stages. Building mobility capacity in the area will be a priority in the years to come as well.

Once the data and information collected at the event is compiled, the conference will be looking to its members to create consensus around next steps and a plan of action to bring about the changes they would like to see.

We still have a long way to go to narrow down our goals and create a specific action plan, said Helstein. But I know Active Trans will be working with us lending their knowledge of relevant laws, their understanding of what’s achievable and their experience of working with various constituencies to make changes.”

If you would like support in thinking through mobility issues in your own neighborhood, please get in touch with julia@activetrans.org.