Home / Blog / How to dominate the Winter Bike Challenge

How to dominate the Winter Bike Challenge 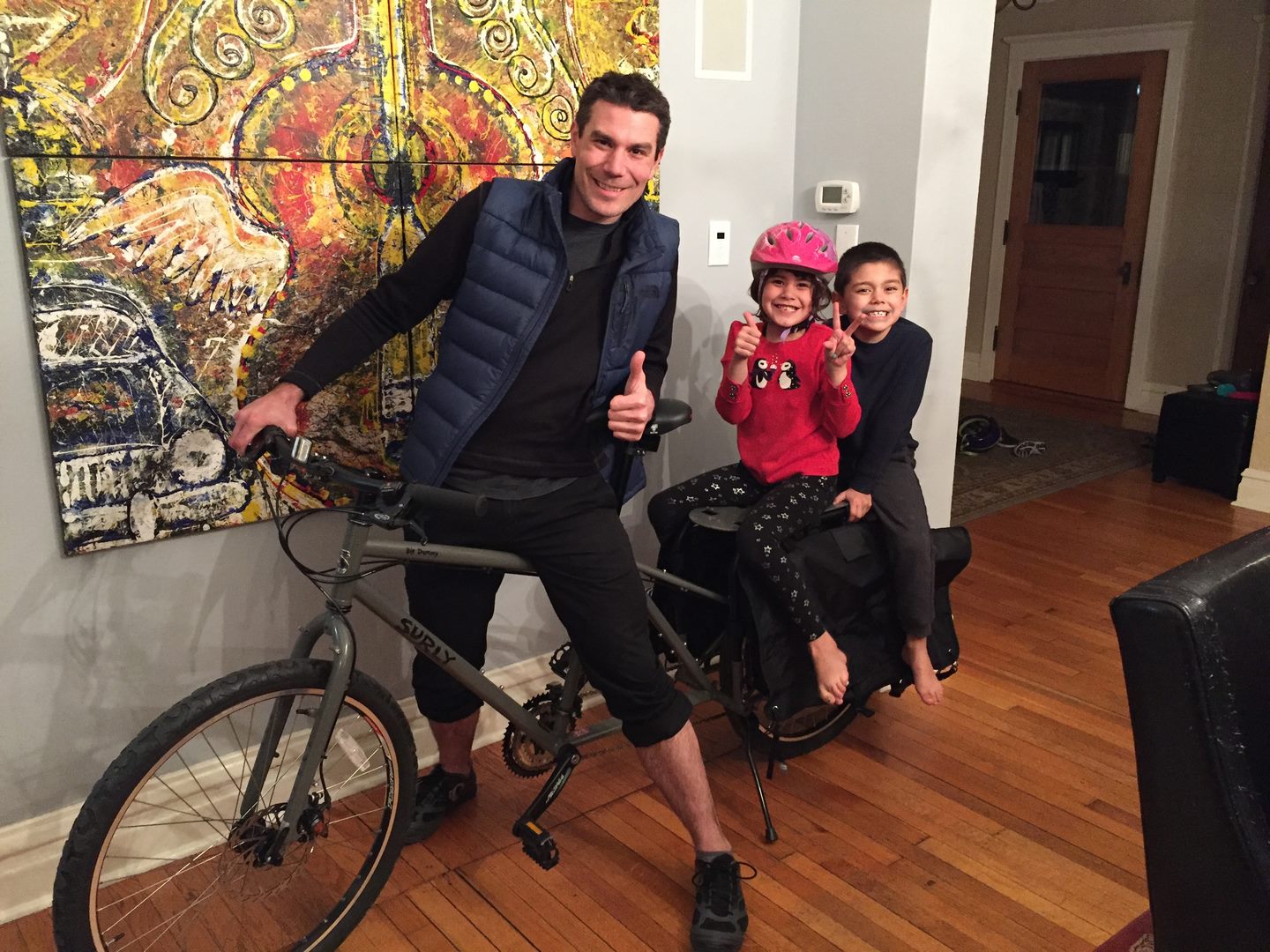 Dan Schreiner didn’t just win the 2017 Winter Bike Challenge. He crushed it. The 34-year-old husband and father of two, who works in the financial services industry, racked up an impressive 48 trips and cycled 1,001.62 miles in spite of the freezing temperatures and icy roads to win the 3rd annual event hosted by the Active Transportation Alliance.

But the top prize went to Schreiner, whose closest competitor logged nearly 300 miles less than him. In addition to winning bragging rights as king of the 2017 Winter Bike Challenge, Schreiner won a bicycle from Kozy’s Cyclery.

We spoke with Schreiner about how he logged 1,000 miles in two weeks — a feat for even the most seasoned winter rider — and how the Winter Bike Challenge converted him into a winter cyclist.

Active Trans: You rode more than 1,000 miles during the two weeks of the competition. Have you always been a hard-core cyclist?

Schreiner: I started getting into fitness in general during my freshman year at Depaul University. I was kind of lazy, and my dad pushed me to run a marathon. I was immediately hooked on running after that, participating in races all over the country. After some joint problems, I turned to bicycling. While I still run a bit, I'm a 90/10 bike/run guy these days.

Active Trans: What prompted you to participate in the Winter Bike Challenge?

Schreiner: I saw an ad on the CTA for the Winter Bike Challenge. It sounded fun. So I rode into Daley Plaza on Friday for some free goodies and decided to stick with it.

I was never a winter biker before the challenge. I always thought winter and year-round riders were crazy — I still do — but I've come to enjoy a nice cold ride. Last year I did my first-ever long bike trip, about 500 miles down the Oregon and California coasts.

The long mileage is really enjoyable to me. Riding 70-plus miles a day sounds kind of intense, but being out in nature with few distractions and lots of time for your mind to wonder is very relaxing. It was hard to stay relaxed on some of the bitter cold days during the challenge. But, honestly, the long, cold days really became second nature, a part of my daily routine.

Active Trans: Where did you ride during the Winter Bike Challenge in order to rack up 1,000 miles in two weeks?

Schreiner: I had pretty defined routes: my house in Old Irving to the Loop down Milwaukee Avenue, the Loop to Indiana via the lakefront, then back up the lakefront to Lawrence and west home. My typical weekday was about 65 miles a day.

On the weekends, I'd head to the North Branch Trail. I’d take Milwaukee Avenue to the Billy Caldwell Golf Course in the forest preserve, then ride the path up to the Chicago Botanic Garden and beyond. It's such a great path. The North Branch Trail was recently extended down to Foster Avenue through LaBaugh.

There's a really good trail and path system from Chicago out to Indiana and Michigan. When we got that awesome 65 degree day during the challenge, I rode out to Highland, Indiana. I was planning on going up to Michigan, but the downside to the warm weather was the awful headwind out of the southeast that kept me from riding to Michigan. But I'm planning on doing the Lake Michigan Circle tour this summer with a buddy of mine.

While I was riding the lakefront path, I saw a rat fall out of the sky! An owl had dropped it. He ended up getting away. There's more wildlife in the city than a lot of people probably think. I saw a lot of deer in people’s front yards, a few coyotes, and lots of raccoons and possums. And a ton of rats!

Active Trans: What kind of support did you get from family and friends during the Winter Bike Challenge?

Schreiner: All my friends thought I was crazy, but they were impressed to see me stick to my goal day after day.

My family was really supportive, but it did take a bit of a toll. I left for work early, and I got home every night after 8 p.m. when the kids were asleep. Then I biked all weekend long, so I really didn't see or spend time with my family during the challenge. My poor kids actually cried a bit.

My wife was very supportive. She was the one that prompted me to ride the long mileage. When I told her about the challenge, she said ride a “ridiculous” amount. So I started paying attention to the rider's data, even going as far as building a model in Excel. I like competition. So I made sure to keep up with the top 10 riders for the first few days. It became pretty clear early on that my daily mileage was an outlier. So instead of first place, I challenged myself to hit 1,000 miles. I put the last few miles on Friday night, which was the last day of race, around 11 p.m.

Active Trans: What did you like best about taking part in the Winter Bike Challenge?

Schreiner: The best part was taking care of myself and getting out of winter’s cabin fever. The calm, empty quietness of the winter nights was eerily pretty. I think I'd generally see one or two other bikers on the lakefront path at night. Bragging rights are pretty cool, too.

Active Trans: What were some of the difficult parts of the event?

The worst ride was a night that I needed to make up miles. I rode my usual route to the abandoned U.S. Steel South Works plant with the ore walls at 90th and Lake Shore Drive, back up to Soldier Field, then turned around and rode back down. It was late and very cold. Something about going back over my tracks was completely awful. I ended up doing 85 miles on a weekday that day.

Another nasty night was when my phone battery died while I was in Indiana — so about 30 miles untracked! I was pretty angry “riding for free” that night.

The freezing rain all day on Martin Luther King Jr. Day was also pretty awful. It pulled down my daily average. It was my shortest ride of the challenge — about 40 miles that day. But it was also a further catalyst to pull ahead. Most other riders didn't log any mileage that day.

Active Trans: What are some of the benefits of biking in the winter that you can’t get any other time of year?

Schreiner: The added exercise and time to myself was very helpful. I think we can all agree that winter kind of sucks. So getting out had a noticeable impact on my mood. It looks like my thighs grew about two inches over the two weeks!

Active Trans: Do you have any safety tips for cyclists who want to ride in the winter?

Schreiner: Watch out for black ice! I surprisingly only had one spill, and it was a bad one. Take it easy during the winter. No one’s out there to win a race. And take care of your bike. A stiff brush and lube does a chain and sprocket good!

Active Trans: How did you feel when you heard that you won the Winter Bike Challenge?

Schreiner: I kind of knew I was going to win since I was closely tracking everyone’s stats in my Excel sheet. I was a bit worried that other people were “banking” miles or not updating miles daily. So once the results were official, I was relieved.

Active Trans: As the winner of the challenge, you won the fat-tire bike. How do you like it?

Schreiner: The grand prize was a fat-tire bike, but I asked Kozy's if I could use the credit towards something else. I didn't think I'd use that bike all that much. They said no problem. I went with the Surly Big Dummy cargo bike! I'd been eyeing one for a while, but I smashed my bike budget last year — I have a bike problem. The discount was all I needed to pull the trigger. My kids love it! My wife is planning on riding them to school once it warms ups. I like being mindful of the environment. So grocery and other short trips are now exclusively by bike. The Dummy’s a real head turner, a solid addition to the family.

Active Trans: Do you plan on taking part in next year’s Winter Bike Challenge? If so, do you think you will be able to top yourself and ride more than 1,000 miles next year?

Schreiner: I'll be back next year! Although probably just for fun. I'm hoping the 1,001 miles stand as a record for a while. I'll come out of retirement to defend it if someone pushes me from the throne.