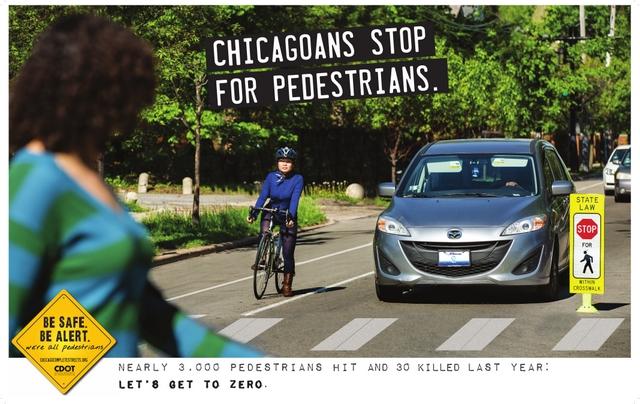 Three thousand pedestrians are hit by motor vehicles in Chicago annually, resulting in about 30 deaths a year. Seven to eight Chicago pedestrians suffer a traffic-related injury every day.

How can these deaths and injuries be prevented?

A growing movement called Vision Zero aims to eliminate all traffic crash fatalities, and Chicago subscribes to the movement with its Zero in Ten campaign to bring the number of pedestrian fatalities to zero within 10 years.

Vision Zero was the topic of a recent symposium in New York hosted by Transportation Alternatives, and representatives from Active Trans and CDOT were in attendance.

Some of the most interesting takeaways are evident in this fantastic CityLab Q&A with Matts-Åke Belin, a traffic safety strategist for the Sweden Transportation Administration and one of the designers of the original Vision Zero plan.

Coming out of the symposium, we joined more than 300 urban leaders, policy makers, advocates, traffic enforcement authorities, and transportation and public health experts at the conference in signing on to a collectively affirmed statement of principles to guide Vision Zero implementation in cities around the world.

Vision Zero already has a great record in its home country. CityLab notes that Sweden has fewer than three traffic fatalities for every 100,000 people, compared to 11.6 per 100,000 in the U.S.

So what can be done in the U.S. and here in Chicago? One thing Belin stresses in the interview is that no matter how much education and enforcement is done, people are going to be people and make mistakes. Looking at the larger issue and smarter ways to engineer streets to reduce the impact of those mistakes is key.

When the city released its 2012 Pedestrian Plan, it included the ambitious Zero in Ten campaign with the main goal being to eliminate all traffic crash fatalities within 10 years.

Active Trans wrote at the time that we were excited to see Chicago make a commitment to improving the safety of all road users, whether they be walking, riding a bike, using transit or driving. We've also helped CDOT develop materials for the campaign (see campaign image above).

Improving intersection safety will be a critical step towards achieving Vision Zero in Chicago. Eighty percent of fatal and serious pedestrian crashes occur within 125 feet of an intersection.

We launched our pedestrian-focused Safe Crossings campaign to tackle the issue in October, and the response and support from Chicagoland has been tremendous.

Join more than 800 supporters in signing our petition that asks local leaders to make crossing the street safer for all users.

Every life lost is one too many; it's not collateral for the transportation system we have. We know the system can be better, and Zero in Ten is a big step forward. Read more about the Zero in Ten plan from CityLab.