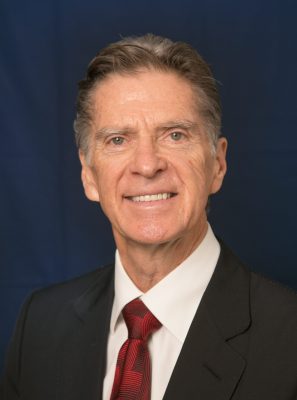 More people live and work in the Loop than ever before. And many credit John Buck in part for helping to contribute to that soaring growth and vibrancy of the city’s central business district.

Considered one of the patriarchs of commercial real estate development in Chicago, Buck (pictured left) has spent the last 40 years shaping the Chicago skyline with his iconic buildings in the Loop, helping to create a dense, compact downtown that lends itself to walking, biking and public transit.

Now as a donor to Active Trans, Buck is partnering with his favorite sustainable transportation advocacy organization to continue his vision of enhancing walking, biking and public transit conditions in the Loop as well as the rest of the city.

As founder and CEO of The John Buck Company, Buck, 74, has made his mark in the Loop by building and renovating renowned office skyscrapers, mixed-use buildings and high-rise residential towers. The developer’s notable structures include the 50-story Leo Burnett Building on Wacker Drive, and the Virgin Hotel, a landmark office building renovation at Wabash Avenue and Lake Street.

Buck’s buildings have helped to bring more jobs and amenities to the Loop, such as restaurants, hotels, condos and apartments, and retail stores — creating a dense area where people can live, work and play.

Development of the Loop has been key to its explosive growth over the last decade and has spurred improvements to walking, biking and public transit infrastructure over the years, including protected bike lanes, extension of pedestrian curbs and a bus rapid transit system.

For the last 20 years, Buck himself has taken advantage of the bicycling and walking opportunities that the Loop offers. He usually bikes to his office in the Loop from his home on East Lake Shore Drive — a 20-minute trip each way. But if he has time, Buck sometimes walks to work.

In addition, the Loop’s compact size allows him to walk to business meetings in the area. “It’s really just a matter of convenience. I try to exercise, but I don’t really like to take time to go to a gym,” Buck says. “So I always try to exercise on my way to work or going home either biking or walking. It’s just a good way to wake up. It’s a good way to chill out going home.”

Buck also supports Active Trans’ campaign to create a continuous Chicago River Trail system. Creating a seamless, safe and accessible trail network like the one proposed for the Chicago River Trail is crucial to improving the quality of life in the city, Buck says. “That’s a great project that Active Trans is working on,” he says.

“There’s so much river space in Chicago, including the Des Plaines, Calumet and Chicago Rivers, that if we could figure out a way to develop and fund these walking and biking trails so that they connect to different neighborhoods and to the downtown business district, it would be a marvelous way to reduce pollution, help people get healthy and for people to commute safely.”