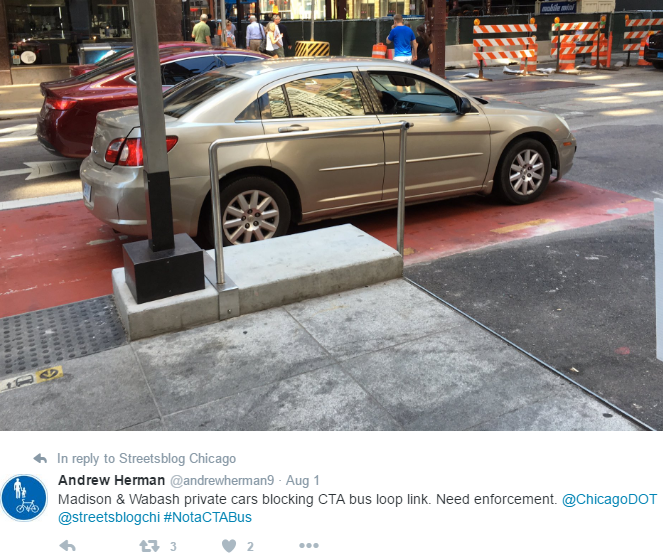 Giving public transit vehicles priority with dedicated lanes is one of the best ways to speed up buses, but it only helps if other vehicles obey the law and steer clear of the lanes.

That’s why Active Trans is joining Streetsblog Chicago and the Metropolitan Planning Council (MPC) in a social media campaign to raise awareness about the laws tied to the dedicated lanes and encourage everyone to stay out of the red lanes.

Next time you see a vehicle other than a CTA bus in the dedicated lanes, snap a photo on your phone and share it on Twitter with #NotaCTABus. Tag @CTA and @ChicagoDOT to let city agencies know.

Read more about the #NotaCTABus campaign on Streetsblog Chicago.

Drivers of commercial vehicles have been some of the biggest violators; private bus companies, taxis and rideshare services like Uber and Lyft are often observed using or blocking the lanes. (If you notice a company name for the offending driver, please try to tag them in tweet as well.)

The campaign is similar to the #enforce940060 effort started by Chicagoans who were fed up with drivers blocking bike lanes around the city. The campaign, which uses a hashtag that refers to the part of the city code that makes it illegal to block bike lanes, has helped raise awareness about the issue. Some local aldermen have even joined in and expressed their support online.

Giving public transit vehicles priority with dedicated lanes makes sense in busy corridors throughout the city where bus ridership is high but local buses creep along due to traffic congestion — especially during rush hour.

We’ll continue to advocate for more dedicated bus lanes, but our case would be stronger if more people start obeying the law and staying out of lanes we already have downtown.

Now you can help with a quick photo and tweet next time you’re in the Loop.