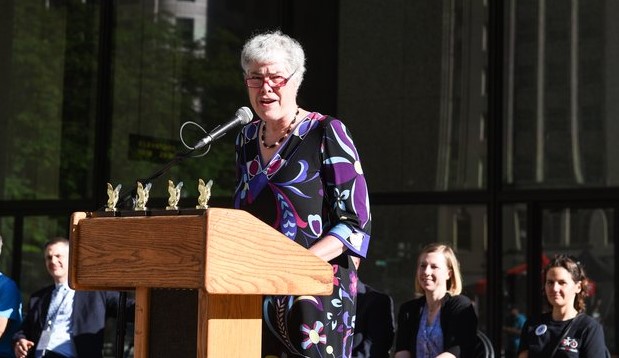 When Luann Hamilton joined Chicago’s Public Works Department — the predecessor to the Chicago Department of Transportation — in 1985, cars were the only transportation mode given consideration on our streets. Hamilton (pictured left) knew she would be in for an uphill battle pushing for projects that prioritized walking, biking, and public transit. But that didn’t stop the sustainable transportation advocate.

Over the next 34 years, she adeptly navigated the rocky and nuanced terrain of Chicago’s transportation and urban planning sectors. Hamilton and her colleagues successfully transformed the region with seminal walking, biking, and public transit projects that are now synonymous with the city, while she rose through the ranks of the agency, becoming deputy commissioner at CDOT in 2005.

Her long tenure at CDOT came to an end when she retired from the agency this year, but her legacy and advocacy for safe multimodal transportation will leave an impact for generations.

“As deputy commissioner responsible for CDOT’s bicycle and pedestrian programs, I sometimes dealt with anger that seemed disproportionate to the project at hand. That’s because our initiative was viewed as threatening a way of life — auto dependency — that has been dominant for a century,” Hamilton says. “This is a big deal, and it requires patience and playing the long game. Being in the same organization for 34 years gave me the opportunity to persist in advancing such change.”

In addition to persistence and patience, Hamilton was able to develop and implement some of the most iconic and vital walking, bicycling, and public transit projects in Chicago with her knack for intergovernmental collaboration. She had buy-in from the top, such as support from Mayors Richard M. Daley and Rahm Emanuel and some CDOT commissioners, including Gabe Klein.

Hamilton also worked with other stakeholders, including CDOT planners, engineers, and architects; other government agencies like the Cook County Forest Preserve District and the Chicago Park District; nonprofits, including Active Trans and Openlands; and community leaders and residents.

That wide support proved crucial as Hamilton and her CDOT colleagues secured hundreds of millions of dollars in federal and state funding to pay for these pedestrian, cycling, and public transit projects over the years. They included an extensive street bikeway network, the Divvy bike-share program, multiuse trails, renovations of CTA train stations, and the Loop Link bus rapid transit system.

Hamilton considers the Major Taylor Trail as her most beloved and challenging project. The 6.5-mile biking and walking trail stretches through the far South Side, providing a critical link between the Dan Ryan Woods in Chicago and Whistler Woods in Riverdale. When Hamilton began working on developing the trail in 1992, she faced community opposition.

To help obtain the support and stewardship of the predominantly African-American communities surrounding the trail, Hamilton and her team suggested naming the trail after Marshall “Major” Taylor, an African-American professional bicycle racer who became a global sports superstar at the turn of the 19th century and spent his final years in Chicago. Hamilton credits this move for helping to win over the community residents and leaders.

Another project that Hamilton had the foresight to pursue was the award-winning 2004 South Lakefront Access Plan. It called for bicycle and walking access every quarter mile along South Lake Shore Drive as required by the Lakefront Protection Ordinance, which seeks to protect and preserve the environmental, recreational, cultural, historical, community, and aesthetic assets and values of the Lake Michigan shoreline.

Hamilton saw the need to create a framework plan to guide the next decade of construction along South Lake Shore Drive, including developing needed bicycle and pedestrian bridges and underpasses. This plan produced new bridges at 35th Street, 41st Street, 43rd Street (underway), and 47th Street as well as underpasses at 57th Street, 59th Street, Hayes Drive, and Marquette Drive as part of the South Lake Shore Drive reconstruction project — making it safer for bicyclists and pedestrians to navigate the area.

Hamilton spent much of her career working on the Navy Pier Flyover, an elevated bridge for pedestrians and cyclists to safely navigate the Chicago River, Lakefront Trail, and Lower Lake Shore Drive. When completed at the end of 2019, the Navy Pier Flyover will be a game changer, according to Hamilton.

It will feature a 16-foot wide path with designated lanes for bicyclists and pedestrians. Safety features will include guard and hand rails and lights that illuminate the path at night. It will also have signs, maps, and pavement markings to direct users to major landmarks like the Museum Campus, beaches, parks, and Michigan Avenue. But the flyover isn’t just about function. Hamilton and her team intended it to be an iconic architectural structure with its serpentine form and visually striking steel rib superstructure.

“We want the flyover to create a feeling of safety and comfort for all users, but we also want people to feel pride and excitement for it,” Hamilton told Active Trans in 2017. “We could have built a standard, pre-cast bridge along Lake Shore Drive, and it would be a lot quicker. But we hope the flyover makes you feel pride and stirs a love of our place.”

Projects like the Navy Pier Flyover would not have been possible without Hamilton’s advocacy and steadfast commitment to improving biking, walking, and public transit in Chicago. Her 34 years of public service has not only transformed the sustainable transportation sector in the city, but has also laid the groundwork for expanding multimodal choices in the future.

This blog post was written by Active Trans Board Member Randy Neufeld. Active Trans Writer/Editor Maya Norris contributed to it. Photo above shows Hamilton speaking at the Bike to Work Rally in 2016.