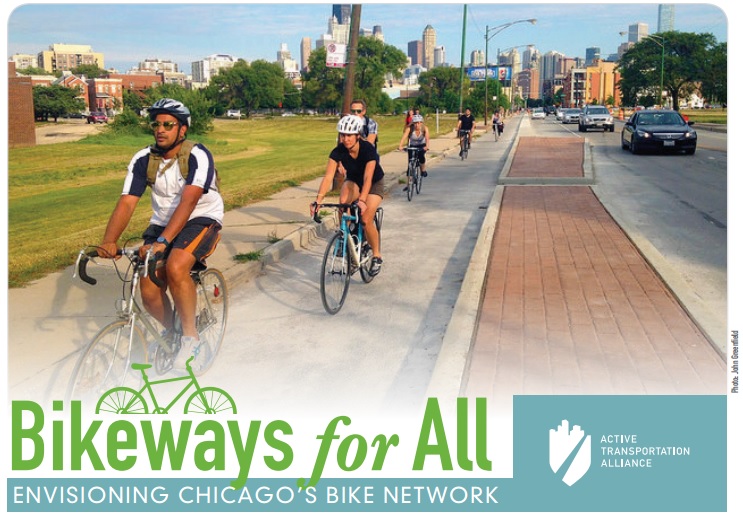 One of Active Trans’ main goals is to make bicycling a comfortable transportation option for everyone no matter their age or ability.

But we know through research, observation and countless conversations that the average person is much more likely to hop on a bike when they are able to bike in places where they feel safe and comfortable.

This is why today Active Trans is launching a bold new vision for cycling infrastructure in Chicago.

The vision — called Bikeways for All — lays out a plan for creating an equitable, city-wide bicycling network that would allow people of all ages and abilities to get around efficiently and comfortably on a bike (read coverage of the announcement in the Chicago Tribune).

Bicycling in Chicago is being transformed into a mainstream mode of transportation, thanks in large part to investments made by city leaders in new trails, Divvy bike sharing and the addition of 100 miles of new bikeways since 2011.

Even though the number of people cycling has multiplied, we still have a long way to go before the average person feels safe and comfortable getting on a bike to ride to work, run errands and drop off kids at school.

In 2010, Active Trans first proposed to then-mayoral candidate Rahm Emanuel the notion of building 100 miles of advanced bike lanes by 2015.

Now that this major goal has been accomplished, it’s a perfect time to introduce a new five year goal focusing on 100 miles of protected bike lanes and Neighborhood Greenways.

The Bikeways for All routes would shrink fears of biking significantly because the routes would incorporate infrastructure proven to make newcomers to biking feel safe:

While this report proposes 180 miles of new low-stress bike routes, Active Trans is urging city leaders to commit to building 100 of those miles by 2020. Our Bikeways for All report proposes five-year goals and longer-term goals for each of these three types of bikeways.

New biking infrastructure offers an excellent return on investment. With the allocation of a modest amount of local resources, Chicago is able to leverage federal funds for many of the types of projects included in Bikeways for All. Currently, the Chicago Department of Transportation puts less than 0.5 percent of its annual budget toward on-street bike infrastructure.

Most of the routes highlighted in Bikeways for All were drawn from Chicago’s current bike plan, Streets for Cycling 2020. Guidance on the routes was also provided by a diverse group of neighborhood leaders, community-based organizations, bicycle advocates, transportation professionals and by more than 700 residents throughout the city who provided input on a survey.

Read the executive summary of the Bikeways for All report.