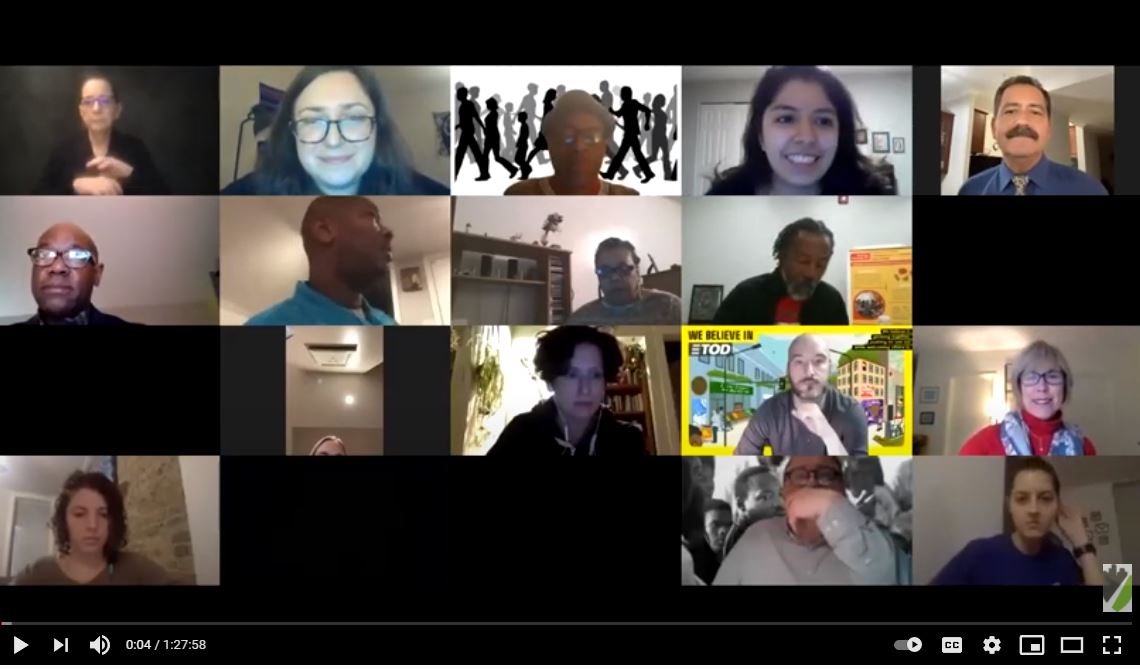 Active Trans recently hosted an online transit justice forum to call attention to the federal budget shortfall for transit agencies. The forum also provided an opportunity to highlight the experiences of local community members and other transit stakeholders.

Reverberating throughout the event was the need for federal support to prevent a collapse of public transit. By all accounts, the consequences will be dire — particularly for people in Black and Brown communities — if we neglect to provide the support that transit needs right now.

If you haven’t already done so, please join the effort to urge Congress to approve $32 billion of federal relief for public transit.

The event’s featured speaker, U.S. Rep. Jesús “Chuy” García, a member of the Transportation and Infrastructure Committee, stressed the importance of protecting public transit because it serves as a lifeline for so many residents.

“Without public transit, the American economy would have grinded to a screeching halt,” he said. “Transit workers are frontline workers and they’re helping other essential workers get their job done too. Now we — Congress — must step up too.”

García also spoke about his work evaluating the role of highways and how they have contributed to racial inequities. “Our overreliance on cars puts a massive financial burden on working people. The priority on highways and roads creates physical barriers of opportunities to millions. Public transit is a great equalizer.”

He said Congress must provide at least $32 billion to transit agencies in the next stimulus package to ensure our Black and Brown communities are kept afloat. He also stressed needing to take a long view.

“It’s not just about saving transit. During COVID, yes, that is step one. We need to think in the longer term. We need to question why transit has always been starved of federal investment. Tomorrow, I’m introducing a resolution to call for equal funding in transit equal to the amount highways get.”

Also speaking during the event was Jason Ferguson, a long-time resident of Garfield Park and the lead organizer for the Garfield Park Community Council’s work on the Pulaski and Madison walkability assessment with Lurie Children’s Hospital.

Ferguson said the lack of mobility for residents is an all-too-common problem in Garfield Park.  The community, he said, is home to many essential workers who need reliable transportation.

To help foster greater mobility in Garfield Park, Ferguson says that we need to address the dangerous intersections like Madison and Pulaski. He also said that fare relief is important because of the financial burdens of the pandemic.

Ferguson said the Green Line on the West Side has a recently rehabilitated station at the Garfield Park Conservatory for people traveling to the neighborhood, “but not good transit for people going to and from work in the neighborhood.”

Rochelle Jackson of the North Lawndale Community Coordinating Council, spoke in-depth about the transit inequities North Lawndale has faced. As an example, she said the Ogden/Taylor Street 157 bus stopped serving North Lawndale west of California Avenue in 2008. As a result, North Lawndale was cut off from the Medical District: “People couldn’t get to work or school.”

Recently, North Lawndale residents won the extension of the 157 bus back to North Lawndale, but Jackson said the pilot starting the pandemic is troubling. “It’s kept the ridership low, not only for this bus route but for all the routes in the city of Chicago.” She says she is afraid the community will lose that bus again and other routes.

Another speaker from North Lawndale was Oboi Reed, leader of the Equiticity Racial Equity Movement. Reed keenly spoke about racial equity being about the fair, just distribution of resources for Black, Brown, and indigenous people and about using these resources to address historic and contemporary injustices.

He also echoed an earlier point that the conversation isn’t only about saving transit or making it whole again, but about making it racially equitable.

“We’re demanding that we dismantle structural racism within the transportation sector in our region,” he said. “Our neighborhoods for generations have experienced the harms of transportation and transit inequities. While we heal a transit deficit in our region, let’s go beyond that.”

Reed offered tangible strategies for addressing the harms of transportation inequities, including the fair, just distribution of resources, being hyper-focused about who benefits, centering community ownership of these plans, and stressing the need for policy changes.

Addressing racialized transit inequities is also about reparations, he said: “This is about repairing the harms that have been inflicted in our neighborhoods, how highways have been constructed and how transit has been inequitable.”

“I’ve got goosebumps now because dots have been connected to fight for federal funding,” said Ken Franklin, president of local ATU308, the rail operators’ union. He made the case that federal funding would also be an investment in the work force, reminding us that any potential service cuts would also mean layoffs of his membership.

Keith Hill, president of local ATU241 bus operator’s union, echoed remarks made by the West Side advocates’ — that the West Side of Chicago hasn’t had the same investment as other parts of the city and that has been due to local decisions. While the current funding crisis requires a boost in federal support, there are long-standing crises of structural racism that we must still fight to overcome locally.

Also speaking was Sam Smith, vice president of legislative affairs from CTA, who spoke briefly about the dramatic drop off of ridership during the pandemic and how the CTA fulfills transportation needs for a huge number of people, including a vast number of essential workers.

As part of the event, Active Trans offered an overview of the Transit Justice Principles, which were recently developed by a national coalition of transit advocacy groups. To create a just future for transit, our transit systems must be equitable, sustainable, economically productive, safe and accessible, and affordable.

In addition to the snippets above, you can also view the entire event.

If you have not done so already, please take a moment to send an email to the Illinois Congressional delegation to provide critical emergency support to transit: www.activetrans.org/congress. Please encourage those in your network to do the same by sharing this easy to access link!