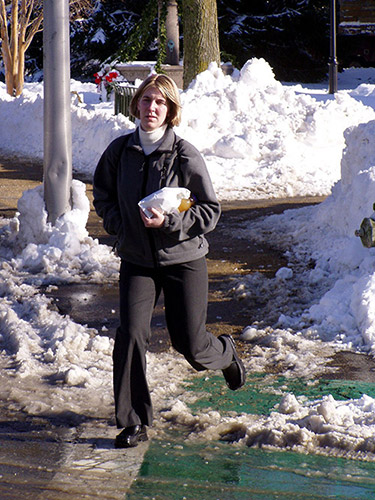 That walking and biking takes a back seat to driving in most cities is never more apparent than after a good snowfall. Even in downtown Chicago, where people moving on foot vastly outnumber those in cars, the streets generally get cleared before the sidewalks.

Making matters worse is the accumulation of snow removed from streets that blocks sidewalks and bike lanes.

Like streets, sidewalks in front of homes and businesses are public spaces.  Unlike streets, however, most cities rely on private citizens to clear sidewalks.

Ideally, cities would treat walking and driving with equal respect by plowing sidewalks like they do streets. Forest Park, Winnetka and some other towns do this.

For cities hard-pressed to pay for sidewalk plowing, another option is to select priority sidewalk snow routes, similar to street snow routes, that the city will plow.

These would be high foot-traffic routes to schools, transit stops, grocery stores, etc.  Cities can also do less street plowing on low-traffic streets and use the savings to pay for plowing sidewalks.

But for now, shoveling sidewalks is usually a civic duty for property owners, and it’s a law in most Chicagoland cities that is rarely enforced.

We are glad to see that Evanston, according to the Chicago Tribune, is doing something Active Trans has been recommending: ticketing owners who don’t shovel, and making them pay the tab for city contractors to do the shoveling.

That’s plenty of time for property owners to do it themselves or, if they are physically unable, to find a neighbor, entrepreneurial teenager or landscape company.

Cities should use discretion and sensitivity when dealing with homeowners who perhaps struggle to even find someone else to shovel their sidewalk, and Evanston is doing this by lining up volunteers to help shovel.

The one red flag we see with Evanston’s approach is the bill for a contractor to shovel: $190 per property on average, according to the Tribune.

That seems awfully high, and with that price tag Evanston can skip the ticket and just send the shoveling bill!