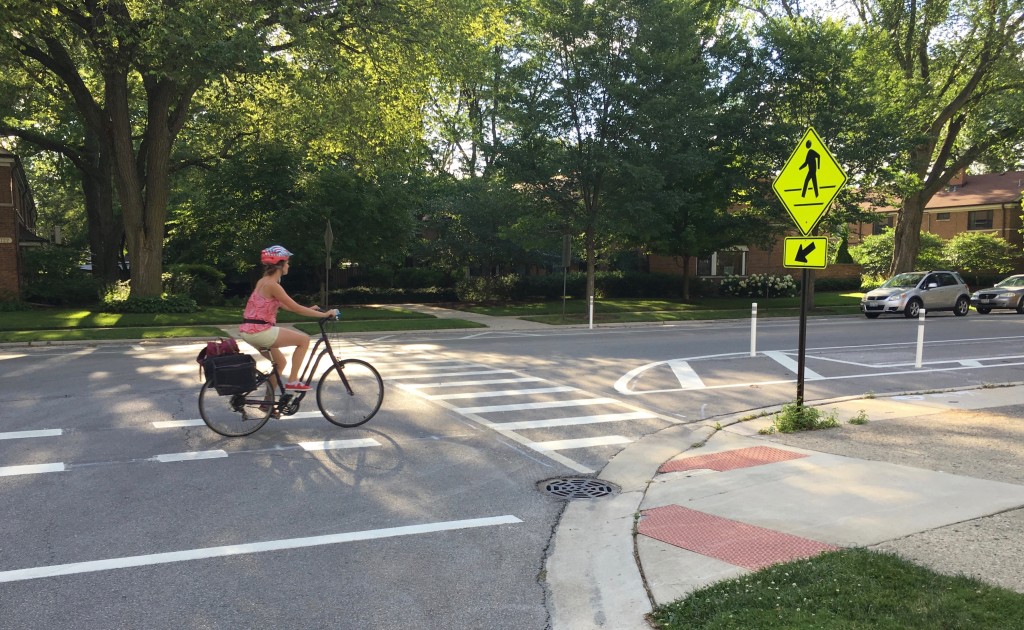 Last week, Active Trans held a Divvy celebration and advocacy meeting in Evanston. It was a great evening of networking and discussion.

The meeting started with a celebration of Evanston’s 10 new Divvy stations and the value they add to increasing biking in the community.

After the Divvy jubilee, the conversation quickly turned to the Dodge Avenue protected bike lanes, which have generated some controversy in the community. While some event attendees admitted to disappointment in the inadequate design of the new lanes, all were agreed that the protected bike lanes make cyclists feel safer.

Protected bike lanes add much needed safety and comfort for cyclists by using a physical barrier to separate cars and bikes and create an experience similar to riding on an off-street trail.

Dodge’s old buffered bike lane has been transformed into a protected bike lane separated from cars by bollards and a row of parking spaces.

The data show a total of 20 bike crashes occurred on Dodge between 2008 and 2012 – this includes the fatal crash of 81-year-old cyclist Lane Swanson who was hit by a CTA bus near Dodge Avenue and Dempster Street.

The new lanes shield people who bike from drivers thanks to the physical barrier. The project also narrowed the street, which has already caused traffic to slow down, further increasing safety of the corridor.

There are multiple schools along the route, including Evanston Township High School. Parents have voiced their support (to both the Chicago Tribune and Active Trans) for the lanes as a safe route for their children to ride to school.

Complaints include claims that the new lanes make Dodge more hazardous for drivers and unsafe for parking. However, Streetsblog’s review of the safety of the lanes refutes most of the claims against the bike lanes.

Some residents are also concerned about the loss of parking spaces along the route, and we support the city reviewing options for restoring parking in and around the neighborhood.

There are certainly some design flaws of the lanes — for example, the lanes end suddenly in front of Dawes Elementary School. This was designed so that the school could retain its drop-off area, but it also creates confusion and unsafe conditions for cyclists.

Those are flaws that the input from the community can fix. The city has already put the time and money into making the bike lanes better, so let’s continue to improve them for the safety of all cyclists.

Come voice your support of the bike lanes at the Evanston City Council meeting on Monday, September 12 at 7:30 p.m. If you are interested in attending the meeting, please contact Nancy@activetrans.org for more information.

What’s clear is that Evanston residents, especially Evanston students, deserve the safest possible option for biking. While more experienced riders may have felt comfortable in the old buffered lanes, the new lanes open the door to many more riders of different ages and skill levels.