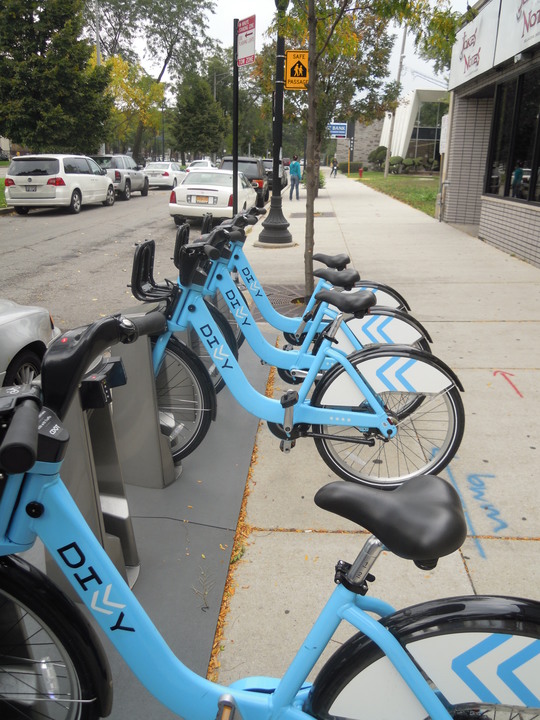 On July 7, the Chicago Department of Transportation (CDOT) announced that it's offering discounted annual Divvy Bikes memberships to low-income Chicago residents with its new Divvy for Everyone (D4E) program.

Through a $75,000 grant from the Better Bike Share Partnership and funds matched by Blue Cross Blue Shield of Illinois, Divvy for Everyone will provide people one-time annual memberships costing $5, which normally are $75.

The goal is to break down economic barriers and increase ridership among those who normally could not afford to use the bike-share service, which increased its geographic locations by adding 176 stations this year.

Qualified residents can apply in person at any of the five designated locations.

To help with outreach, Divvy partnered with Go Bronzeville, a transportation campaign in Bronzeville, and Slow Roll Chicago, a bicycle advocacy group.

“This effort, together with Divvy's expansion, will allow the system to serve significantly more communities of color and low- to moderate-income neighborhoods,” said Oboi Reed, president and co-founder of Slow Roll Chicago. “We believe intensely in the transformative power of bicycles… [W]e consider Divvy a public resource that all Chicagoans should have equitable access to.”

By building more bike equity, people in low-income households are able to explore bikes as a viable form of affordable transportation, and thereby gain better access to jobs and become more economically empowered.

Unfortunately, when the Chicago Tribune covered the newly unveiled Divvy for Everyone program, the article referred to Chicago’s protected bike lanes as “controversial.”

It's an unfair characterization at the very least.

In a report issued last year by the National institute for Transportation and Communities, 99 percent of cyclists in the study felt that the protected bike lanes on Dearborn and Milwaukee Avenues increased bike safety.

Protected bike lanes make streets safer for not only cyclists, but pedestrians and motorists as well by encouraging predictable and responsible behavior on the road.

If you are interested in making Chicago’s bike network stronger, check out our Neighborhood Bikeways Campaign.