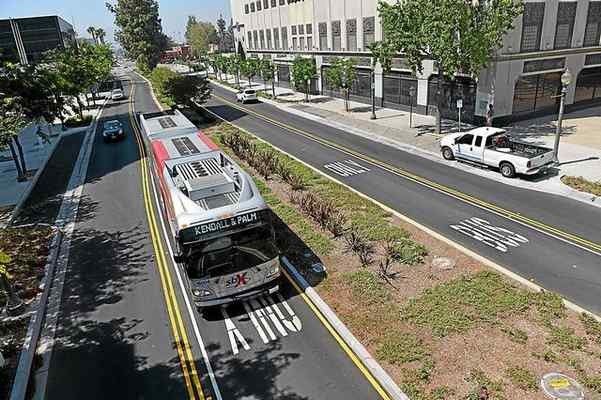 More cities across the United States are using bus rapid transit to help solve some of the challenges of conventional bus service.

In Chicago, despite record-setting levels of public transit ridership, use of the city’s bus system continues to decline. Improving bus service along high-use bus corridors would help reverse the trend and give Chicagoans more choices as they decide how to get around.

Many cities are already seeing the benefits of high-quality BRT systems. San Bernardino launched their sbX BRT line in 2014 along a 16-mile corridor connecting Cal State San Bernardino to Loma Linda University. The route features camera protected bus-only lanes in the center of the street, signal priority at all intersections and off-board payment at stations.

The completely ADA accessible busses are powered by compressed natural gas and are outfitted with free WiFi and charging outlets, as well as ample bike racks.

BRT in San Bernardino has experienced a significant uptick in ridership in its second year, with pass purchases increasing 79 percent from 2015.

Local newspapers have noted the diverse crowd sbX attracts, from students, to employees of the city’s hospitality industry, to families attending events at the Coussoulis Arena.

City officials and sbX riders attribute the system’s success to its location along a route that already had high levels of ridership, and the fact that taking BRT is both faster and cheaper than driving.

The city is already eager to build on the success of sbX, with several more routes in the planning process and a bus transfer complex currently under construction.

Chicago is lagging behind our peer cities when it comes to our bus system, but that trend does not have to continue.

By incorporating BRT features along Chicago’s busiest bus routes, the city could improve connections between jobs and housing, revitalize business, and fill a significant gap in our transit system — all at a fraction of the cost of a new subway or elevated rail line.

This is the ninth post in a blog series on Bus Rapid Transit (BRT) in the U.S. Learn more about our BRT organizing and contact us to get involved.

Image courtesy of The Sun.