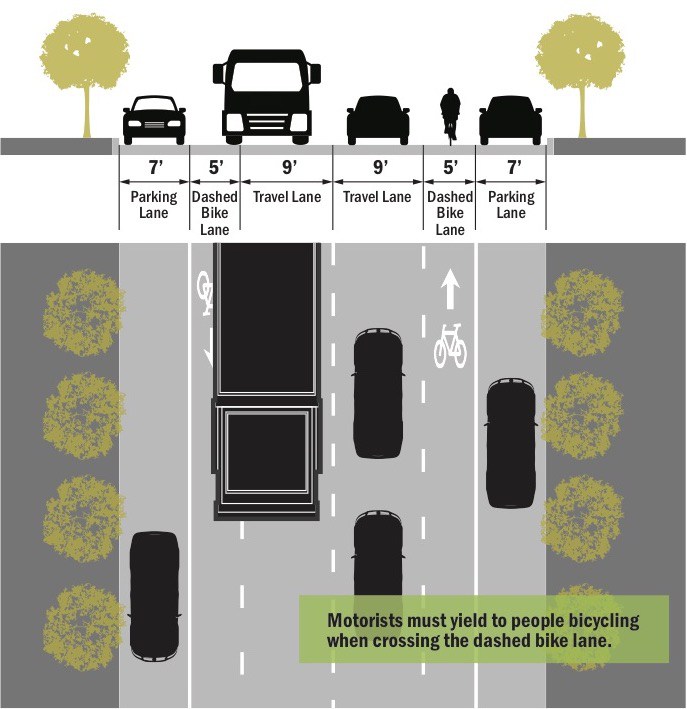 In a victory for people who bike, new bike lanes are coming to Milwaukee Avenue in Wicker Park.

As part of a series of near-term improvements to the street, the Chicago Department of Transportation is beginning work to install advisory bike lanes, which will feature dashed lines to create space for people on bikes (see image).

The dashed bike lanes are a good near-term solution to make Milwaukee Ave. in Wicker Park safer for people biking, and we commend CDOT for listening to the strong message the community sent calling for better conditions for walking and biking on this street.

In addition to the new bike lanes, CDOT is also installing many other improvements that promise to greatly lower the stress for people moving through the area.

Earlier this summer, more than 1,500 Active Trans members and supporters signed our petition calling for a safer Milwaukee Ave. for people on foot and bike.

The unacceptable history of crashes added to the sense of urgency to bring changes to the street. So it hasn't been a surprise that the need for bike lanes has been repeatedly singled out as a top priority for advocates.

Thank you to everyone who signed our petition, joined us at our rally and showed up to the two public meetings hosted by CDOT.

Active Trans will continue to push our long-term vision to re-design the street with protected bike lanes and more space for pedestrians, a goal that was echoed by CDOT officials during recent public meetings. Ultimately, these are the measures needed to eliminate the dangerous crashes that have plagued the corridor in recent years.

But the dashed bike lanes and pedestrian safety improvements in this project are a good interim step.

Advocates have another opportunity to help shape the future of Milwaukee Ave. further north in Logan Square and Avondale.

On August 30th, CDOT will be hosting the first in a series of public meetings to solicit public input on plans to re-construct Milwaukee Ave. between Belmont and Logan Boulevard.

As part of the long-term work to entirely re-build Milwaukee Ave., this is a much larger project than the Wicker Park project with sufficient resources to implement many of the big ideas we’ve pushed for further south in the corridor – such as protected bike lanes and more space for people on foot.

We encourage everyone to show up to the upcoming meetings and share their support for safer walking and biking.