Home / Blog / Cultivating the next generation of advocates

Cultivating the next generation of advocates 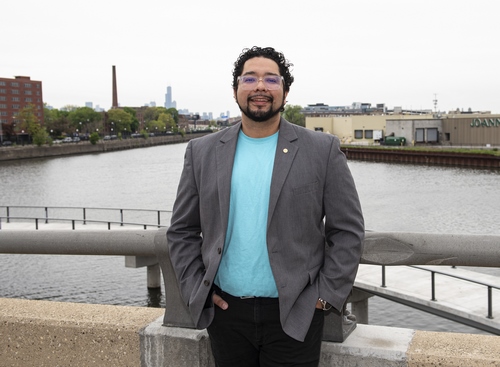 Marco De La Rosa is making sure the voices of some of the youngest stakeholders in Active Transportation Alliance’s Chicago River Trail campaign are heard loud and clear.

As club director of the Linda & Bill Gantz Boys & Girls Club of Chicago in Lathrop Homes on the North Side, De La Rosa is nurturing the advocacy and leadership skills of his students by having them take part in Active Trans’ efforts to push for a Chicago River Trail.

By getting the kids involved in advocating for a river trail near the Lathrop Homes development they’re getting valuable insight and firsthand experience about the importance of civic engagement.

“I’m really big on involving our youth in [the civic engagement] process. Our overall mission at the Boys & Girls Club is to enable youth to reach their full potential of being responsible citizens,” says De La Rosa (pictured above). “The Chicago River Trail is one of those big development projects that you want the community residents, including the kids, to really be active in voicing their concerns and their opinions and their needs and wants for the end result of the Chicago River Trail.”

The kids also help set up the rooms for the regular meetings that the Chicago River Trail Coalition holds at the Boys & Girls Club. It gives them a chance to interact with the community leaders, nonprofit organizations, urban planning experts, and local residents that attend the meetings. In addition, the students often take meeting attendees on a tour of the river and riverfront path.

De La Rosa and some of the students also took part in Active Trans’ recent walkability audit of the area. The students shared their opinions and input on potential places to expand the trail and institute traffic-calming measures needed in the neighborhood.

“Some of them bike, some of them walk, some of them are on public transit,” De La Rosa says. “They’re really good people to get consensus and data from because they’re on these streets daily.”

By working with Active Trans, the kids are not only seeing advocacy in action and honing their own advocacy skills, they are now also the recipients of an Active Trans Bike Week grant.

The Boys & Girls Club will use the grant to teach the students about bike safety and maintenance. It will also use the grant to buy the supplies the kids need to repaint and repair some of the ghost bikes around the city, which honor bicyclists who were killed while cycling.

“This is about giving back so the kids know what they’re doing has a meaningful impact,” De La Rosa explains. “Because it’s not just about drawing some lines on the street so bikes can have their own lanes, but really saving lives. We’re giving back by doing this work as well as working with the Chicago River Trail Coalition and doing these walkability audits.” 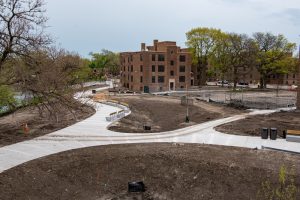 New sections of the Chicago River Trail as it winds past the Lathrop Development.

The kids’ civic engagement is indeed paying off. The riverfront path along the Lathrop Homes is expected to be completed this summer.

According to De La Rosa, the kids are looking forward to using the green space for a multitude of academic, sports, and recreational activities. It will give them a safe off-street trail to walk and bike. It will also be an opportunity to learn more about the biodiversity of the area.

But most importantly, they want this part of the Chicago River Trail to serve as a hub for community activities and collaboration, bringing residents of the area together for events like the back-to-school rally the Boys & Girls Club plan to host at the riverfront.

Green spaces like the Chicago River Trail not only improve physical and mental health, but they can unify a community, De La Rosa says

“Being nine to 10 months in with the Chicago River Trail project, there’s been nothing but positives. Everyone around here is proud of it. There’s a motto that everyone’s saying around here: Lathrop strong,” he says.

“We have this reputation of being a very segregated and divided city. … These types of developments and the activation and utilization of the Chicago River becomes these funnels and pipelines for unity and integration and collaboration and bringing people together,” De La Rosa says.

Learn about other recipients of Active Trans’ 2019 Bike Week grants.  And don’t forget to join in the various Bike Week activities, including the Bike to Work Challenge.

Learn about advocacy opportunities and keep up with progress on the Chicago River Trail by signing up for advocacy alerts.