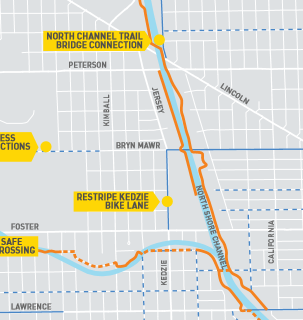 Imagine bicycling or walking along the Chicago River in the presence of beautiful trees and lush green vegetation.  Along the trail you encounter turtles and butterflies and hear birds chirping in the warm sunlight.

Wouldn’t it be great to bicycle and run along the river in such a scenic environment?  A step toward bringing more of this vision to Chicago happened at a recent public meeting at River Park in the Albany Park neighborhood.

At the meeting, the Chicago Park District, US Army Corps of Engineers and Friends of the Chicago River provided an overview of a proposed project to improve the ecological system in three continuous city parks: Ronan, River and Legion.

This endeavor is part of the Great Lakes Restoration Initiative; the team is also collaborating with the Illinois Department of Natural Resources to create more river habitat.

We’re excited about this effort because it supports our goal of creating a continuous trail along the Chicago River Trail. The project falls in Zone 3 of the Active Trans’ River Trail Action Plan, which runs along the river from Lawrence north to Peterson.

River Park is important because it sits at the confluence of the North Branch and North Shore Channel, an important crossroads for the Chicago River Trail system.

The map shows the river segments targeted for improvements and how they fit into a Chicago River Trail.

The proposed work includes removing the River Park dam near West Foster Avenue — a project that will open nine miles of river to fish and aquatic wildlife.

Plans also call for the removal of invasive plants and trees along the river bank and the re-planting species native to Chicago.  These improvements will stop erosion and increase the types of birds, turtles and fish that can share this ecosystem.

In addition to discussing their hopes for attracting Blanding’s turtles and supporting northern pike recently introduced in the river, residents at the meeting also spoke up for enhancing and extending existing bicycle and pedestrian paths.

The project team anticipates breaking ground in the winter of 2018 and finishing it in 2022. Key stakeholders who attended the meeting included Alderman Deb Mell (33rd Ward) and River Trail campaign partners Andy Donakowski and John Quail of Friends of the Chicago River.

So what is the next step?

The Chicago Park District, US Army Corps of Engineers and Friends of the Chicago River plan to hold another community meeting this summer. We will monitor this project and keep you updated.

If you live in the Albany Park neighborhood and have ideas about trails and how to improve the environment, we’d love to hear from you. Please contact Steve Simmons, Active Trans, at 312-216-0472 and steve@activetrans.org.