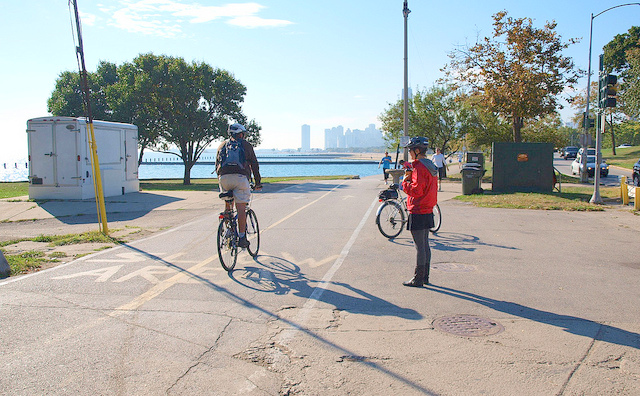 Megan Williams, 27, was jogging on Chicago’s Lakefront Trail while training for her first Chicago Marathon earlier this fall when she was suddenly struck by a bicyclist.

The next thing she remembers is waking up in a hospital bed with her hands restrained, a breathing tube down her throat, a fractured skull and bleeding in her brain.

Thankfully, Megan is feeling better today. And as a result of this terrible experience, she's determined to be part of improving safety on the trail for all users.

“If they could divide the path into separate paths, one for bikes and one for everyone else, that would help,” Megan told the Sun-Times last month.

She said she isn’t sure who to blame – if blame should even be assigned. She just wants to help make sure these crashes don’t keep happening.

This week Megan told her story in an online forum set up by the Chicago Park District, which manages the Lakefront Trail, to solicit feedback from the public on next year’s budget.

The idea is already one of the most popular ideas on the site in less than 24 hours.

You can support her idea by rating and commenting on it in the online forum. Users are required to create a free account and can explore ideas and critical questions about the future of Chicago’s parks.

Active Trans has identified separating bicyclists and pedestrians on the trail as one its advocacy priorities for next year.

In our 2013 People on the Trail Report, published in partnership with Friends of the Parks and the Chicago Area Running Association, it was the number one priority for trail users.

It's also the top public priority in the ongoing planning process for the reconstruction of North Lake Shore Drive, according to feedback collected at public meetings and online.

We continue to work with all types of trail users to highlight ways to improve the most popular trail in the country. If you’re interested in getting involved in our lakefront trail advocacy efforts, contact Campaign Director Kyle Whitehead at kyle@activetrans.org.

Rate and comment on Megan’s idea by creating a free account on the Park District’s online forum.