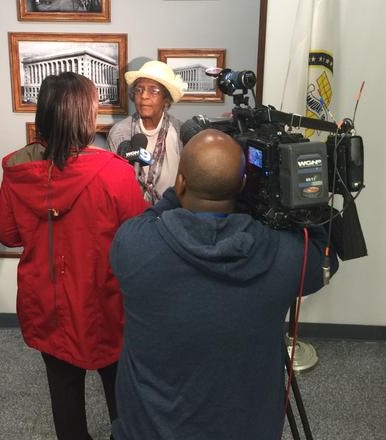 After a strong show of support for transit expansion from county residents, the Cook County Board took the first step towards embracing our Transit Future vision this week.

At Wednesday’s board vote on a one percent sales tax increase, President Preckwinkle spoke about her long history as a transit advocate and the need for the county to re-invest in its infrastructure. The new revenue from the sales tax increase will allow the county to stop diverting gas tax revenue away from transportation projects, an inefficient practice that’s been going on for years.

Transit Future Campaign Director Jacky Grimshaw (pictured) testified at Wednesday’s hearing, saying she’s encouraged by these initial steps but county leaders need to do more. We urged the board to not only maintain our crumbling transit infrastructure but expand the hub and spoke system so it provides greater job access.

Our focus now moves to advocating for including transit expansion funds in the county’s 2016 budget, which the board will begin considering this fall.

Supporters like you played a critical role in making this happen, and we’ll need you to continue to speak up for transit riders in the city and suburbs. Transit supporters generated more than 1,500 letters to the county board over the last few weeks, and several commissioners acknowledged this outpouring of support in our meetings.

There’s still time to sign on, and please share this letter with your networks online if you’re already on board.

Stay tuned to the Active Trans blog and look out for our calls to action in your inbox in the coming weeks and months as the campaign rolls along, and keep riding!