Cottage Grove to become a better street for walking 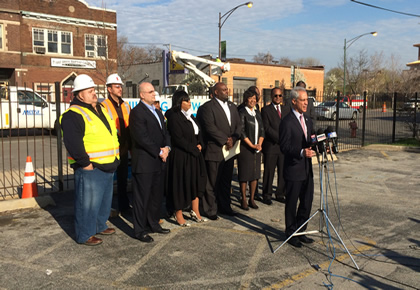 A six-block stretch of Cottage Grove Ave. from 77th to 83rd St. in Chatham will be upgraded this year to make this high-crash stretch of roadway safer for people walking while attracting more customers to local businesses.

Construction will begin this spring and continue for about one year. The Chicago Department of Transportation (CDOT) worked closely with 6th Ward Alderman Roderick Sawyer and 8th Ward Alderman Michelle Harris on the project.

The stretch includes the intersection of 79th and Cottage Grove, one of the most dangerous intersections in the city for people walking and biking.

The intersection appeared on our Safe Crossings list as as result of its 36 reported pedestrian and bike crashes from 2006 to 2012 – fourth highest in the city.

We first learned about the streetscaping plan when meeting with Ald. Sawyer soon after launching the Safe Crossings campaign.

Ald. Sawyer worked with the city to prioritize and fund the project last year. The alderman has been a leader on bike and pedestrian issues, recently working with CDOT on a traffic calming project on south State St. between 69th and 79th streets.

Although two lanes of traffic in both directions on Cottage Grove will be maintained in the new design, the hope is the streetscaping improvements will help calm traffic and make the overall environment safer for all users, especially people walking.

The project is part of the Greater Chatham Initiative, a coalition of groups working together to support and enhance the communities of Chatham, Auburn Gresham, Greater Grand Crossing and Avalon Park.