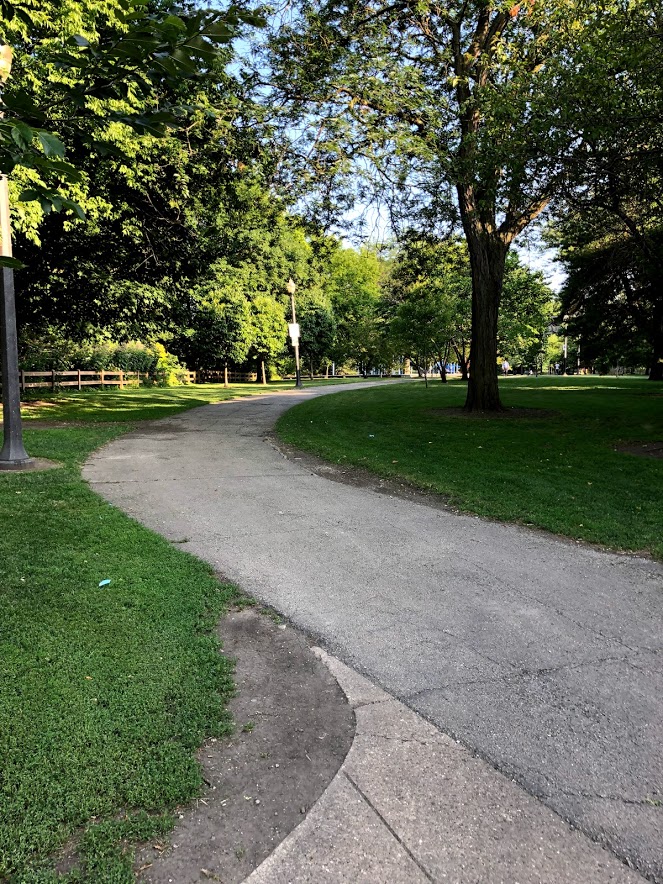 Partnering with neighborhood organizations and residents to create better access to the Chicago River and safe connections between trails is a major focus of our Chicago River Trail campaign.

Whether it’s adding a trail along the river, building safe on-street connections, or even a floating a trail, there are many viable ways a continuous Chicago River Trail could be built.

Recently, we joined the North River Commission and supporters on Chicago’s Northwest Side on a walk to explore a potential on-street connection between trails at River Park (pictured) and the south end of the North Branch Trail extension in Gompers Park.

This roughly two-mile stretch is one of five remaining areas that need to be connected via trail for the city to accomplish its longstanding goal of a continuous path on the Chicago River.

The route we walked runs west from River Park on Carmen Avenue before veering south to Argyle. Then it connects back to Carmen via Ridgeway and gets you to Kostner and Foster Avenue and the North Branch Trail.

We’re pleased the Chicago Department of Transportation is currently studying how to bring about safe on-street connections for people walking and biking between these riverfront parks.

Along with providing safe access to green space like Kiwanis Park, this route would make it easier to get to existing trails and bridges over the river, as well as popular neighborhood destinations like Von Stueben High School and Volta Elementary School.

Walking the neighborhood also helped us get a better sense of how conditions for pedestrians and cyclists might be improved. Residents suggested adding traffic calming measures at Carmen and Central Park Avenue — before and after it crosses the river.

Other initial recommendations included: removing invasive species along the path in Kiwanis Park and developing a better connection between Little Gompers and Gompers Park so users can experience the dynamic wildlife offered by these parks.

Adding a safe on-street connection between River and Gompers Park would be a major step towards a continuous river trail. A complete trail would transform areas around the river into vibrant open space and connect people to jobs, shopping districts, and recreation areas.

So where is this project headed next and how can you get involved?

The North River Commission, Friends of the Chicago River, and Active Trans are analyzing the information collected from the walk audit and an audit of the Chicago River. Eventually, we’ll develop recommendations for this route as well as river enhancements.

If you have ideas about how the connection between the North Channel and North Branch Trails could be developed, please contact Steve Simmons at Active Trans; steve@activetrans.org

If you haven’t already, please join the campaign for a continuous Chicago River Trail.