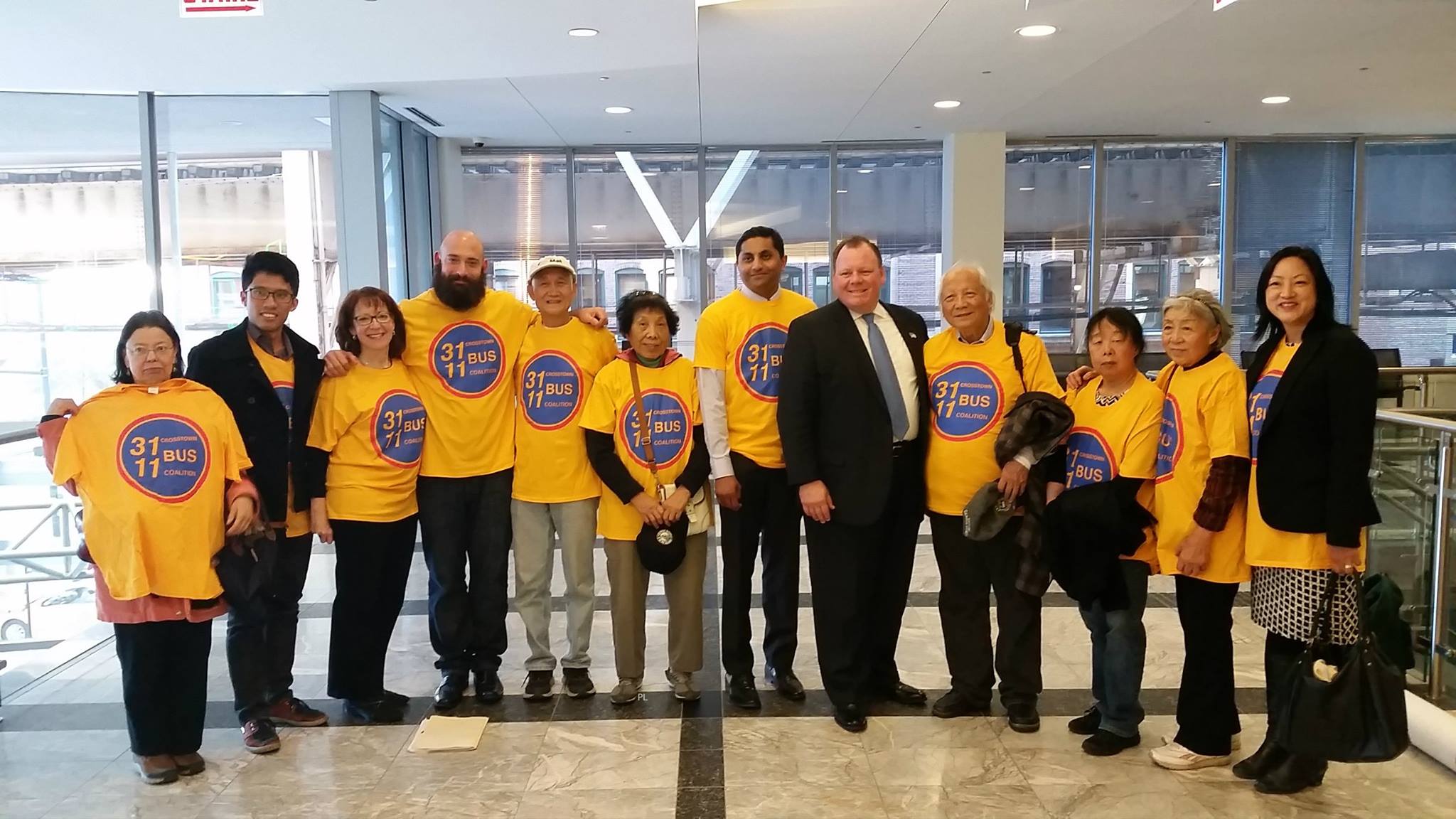 When advocacy groups combine their efforts, their chances for success grow.

That’s what happened when a group of advocates on the South Side of Chicago and another group on the North Side joined forces to reinstate CTA bus service on Lincoln Ave. and 31st St.

The groups — coordinated across the city and led by local aldermen and a group of committed residents, organizations and businesses — worked hand in glove over a period of months to achieve two important victories.

“It made sense to form a coalition together because we wanted the same thing: transportation equity,” said Debbie Liu, community development coordinator at the Coalition for a Better Chinese-American Community (CBCAC). “We had large crowds go to meetings. It started as a couple of people, but more and more people…started showing up to CTA board meetings.”

Although the coalition formed only months before its big win, the fight to bring back the #31 and #11 buses had gone on for years.

In 1997, the CTA eliminated the #31 bus on 31st Street due to low ridership, leaving communities between Bridgeport and Little Village without an easy east-west travel route.

Before working on the campaign to reinstate the 31st St. bus, Bridgeport resident Suzanne Goebel noticed the lack of transportation in Bridgeport.

Then once the route was cut, Goebel knew first-hand how people had a harder time accessing Mercy Hospital, Orange and Red Lines, community resource centers, schools and churches.

Community organizations and local residents worked together to establish the 31st Street Bus Coalition, which included the Bridgeport Alliance, CBCAC, and Southsiders Organized for Unity and Liberation.

The group worked with the Little Village Environmental Justice Organization and started attending CTA board meetings. The coalition achieved a partial victory when the CTA decided to perform a feasibility study and 180-day pilot program in 2012.

After the pilot, instead of reinstating the #31 bus route as the group had hoped, CTA decided to extend the #35 bus east to the 31st Street Beach on weekends and holidays during the summer. Part of the #35 route was also extended west in Little Village.

Not satisfied, the group continued to campaign for its original goal — bringing back the #31.

Early last year during the aldermanic elections, the group held a candidate forum in Bridgeport. The 11th Ward aldermanic election was won by Patrick Thompson, who supported reinstating the bus and knew public transit was important to his constituency.

“Having elected officials involved was a huge step for us,” said Rene Paquin, member of the Bridgeport Alliance. “In the past, we had officials sign our petitions, but to actually have them lead the charge and doing the work was huge.”

Meanwhile, on the North Side, 47th Ward Ald. Ameya Pawar was spearheading the campaign to bring the #11 bus back.

Among the CTA cuts in 2012 was the #11 bus on Lincoln Ave., which travelled between Western and Fullerton Aves.

Not only were transit users affected by having to find alternative routes, but businesses along Lincoln noticed a decline as well. As an alternative, the CTA encouraged people to take the Brown Line, which misses a number of sections of this stretch of Lincoln Ave.

When the CTA announced elimination of the route, it instantly became a major concern for Pawar. He formed a coalition of supportive elected officials, which included Illinois Senate President John Cullerton. Many residents, neighborhood groups, businesses and chambers of commerce also rallied for the cause.

Realizing there should be more focus on building transit equity across Chicago, Pawar and his staff reached out to the 31st Street Bus Coalition.

Both groups found they were fighting for the same cause.

By refocusing the campaign and combining their strengths and resources, they created the Crosstown Bus Coalition in the spring/summer of 2015.

They continued to do local actions and attend CTA board meetings, showing that communities and elected officials can work together to make change happen.

“It demonstrated that if people organized themselves, they can achieve it,” said Jim Poole, chief of staff for Pawar. “At points it was hopeless, but the endurance paid off. It ended up strengthening [us] in the process.”

Pilot programs for both routes are slated to start this spring.

Photo above courtesy of the CTA31 / CTA11 Crosstown Bus Coalition.