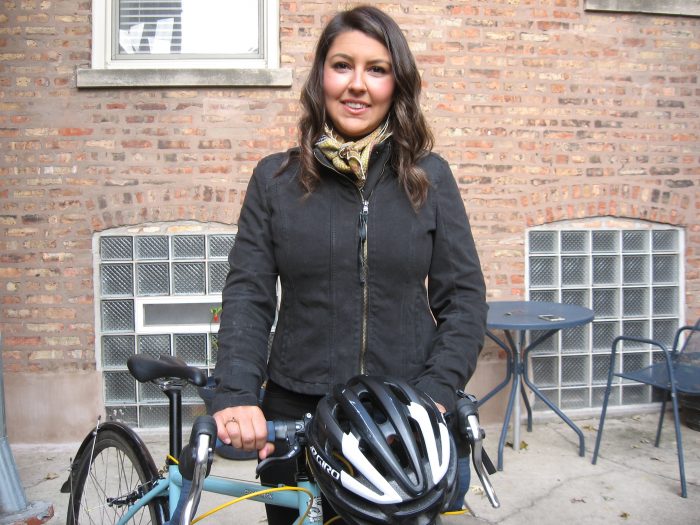 Getting around Chicago on a bike is not as daunting as it seems.

That’s what Linor Vaknin learned when she became involved in Active Trans’ annual Bike to Work competition (going on now and continuing until the end of the week).

Prior to the event, biking on Chicago streets was out of the question for her. Too hectic, too scary.

Then, during the Bike to Work competition in 2010, Linor (pictured left) saw throngs of people safely biking on Chicago’s streets. She met people who were having fun while contributing to a healthier, more sustainable city.

“I remember feeling super-energized by the event,” said Linor, a marketing manager for Clif Bar. “People were cheering each other on. I felt a lot of enthusiasm for getting on my bike.”

Linor then began biking on her 3-mile commute, employing tips she learned on how to ride smart and stay safe.

Years later, she still loves biking around the city for her job, for errands, and for socializing.

Part of what made Linor want to hop on a bike and keep biking was the support for biking demonstrated by her employer, Clif Bar.

Clif Bar, a long-time supporter of Active Trans, prides itself for supporting its employees’ “personal journeys toward sustainability.”

This is done through incentive programs that give a friendly push towards planet-friendly practices, including biking for transportation and maintaining good health. 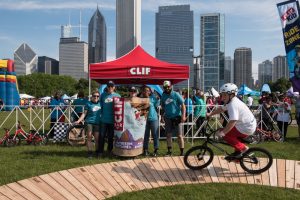 There is a natural connection between Active Trans and Clif Bar, which continues to be a family- and employee-owned company.

At Active Trans, we are proud to consider CLIF Bar a partner and appreciate the support they provide for better biking in the region.

Thanks to support from businesses like Clif Bar, we’ve been able to hold our Bike to Work Challenge for 28 years. Over that time, many thousands of people like Linor have been inspired to switch to a two-wheeled commute.

In recent decades, as our biking events have grown by leaps and bounds and our influence as a regional advocacy group has blossomed, it’s no coincidence that the number of people biking in Chicago has roughly tripled.

Part of this success relies on companies like Clif Bar that support our work and believe strongly in our mission.