Clear the Way of dangerous obstructions 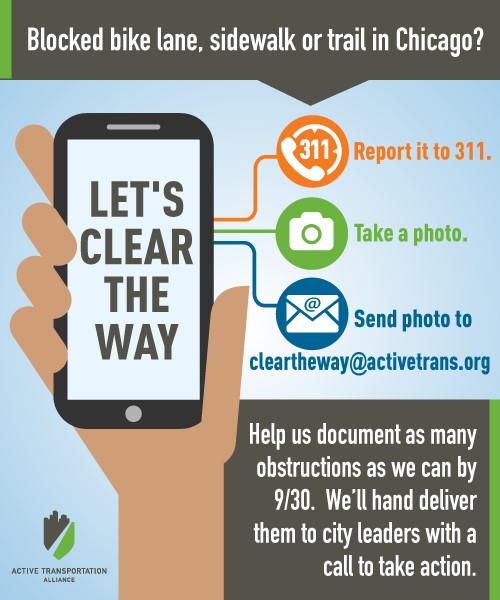 We always tell our members and supporters in Chicago to call 311 to report blocked sidewalks or bike lanes, and any street or sidewalk conditions that make it dangerous to walk or ride a bike.

It may not always feel like the most satisfying step, but these reports do lead to action in many cases and they create important data the city can use to inform future decisions.

However, the recent response to dangerous construction zones blocking sidewalks and bike lanes, poor pavement conditions, and illegally parked vehicles clogging up our sidewalks, bike lanes and trails has not been sufficient and it’s putting people in harm’s way.

So we think the time has come for us to kick things up a notch.

We’re calling on all Active Trans members and supporters to join our new campaign, Clear the Way.

We’re launching an all-out blitz to flood the City of Chicago’s 311 line to report conditions that put people walking and biking in danger.

In addition to calling 311, go a step further and share your reports and photos with us so we can compile and deliver them directly to city leaders with a call for them to take action.

Also — did we mention it’s competitive?

Let’s see how many reports and photos we can generate between now and the end of September.

We’ll hand out awards to the most prolific 311 reporters and for the best photos we get.

Here’s how you can participate:

As mentioned above, we’ll compile your reports and deliver them to the mayor and city leaders along with a demand for action.

Why are we doing this? (Like you need to ask?)

Chicago is facing many challenges and city agencies and workers are dealing with limited time and resources. Much of the construction work we see on the street is being carried out by private contractors, who may not be complying with city rules established in their construction permits. We get it is a complicated issues.

And this work is critical to the maintenance of our utilities, streets, and trails. But when busted bike lanes and blocked sidewalks force people walking or biking into busy streets, the risk of crashes, injuries and fatalities greatly increases. In addition, communication in advance of and during these projects has often been lacking, especially when compared to the type of advanced notice and detours afforded to people who drive.

The City of Chicago’s own Rules and Regulations for Construction in the Public Way call for proper accommodation around construction zones. Frequently, it’s private contractors who are fault, and 311 calls help city officials discover the problems.

Already, social media campaigns like #enforce940060 and #NotACTABus have been organizing online to raise the profile of vehicles blocking bike and bus lanes. We’ll draw photos and reports from these existing campaigns to share with city leaders as well.

Tell all your friends and family, and help us Clear the Way and reclaim our streets for everyone.

Subscribe to our monthly e-newsletter on our homepage and keep up with the latest news about cleaner, healthier transportation in Chicagoland.