Clear the Way generates over 500 reports 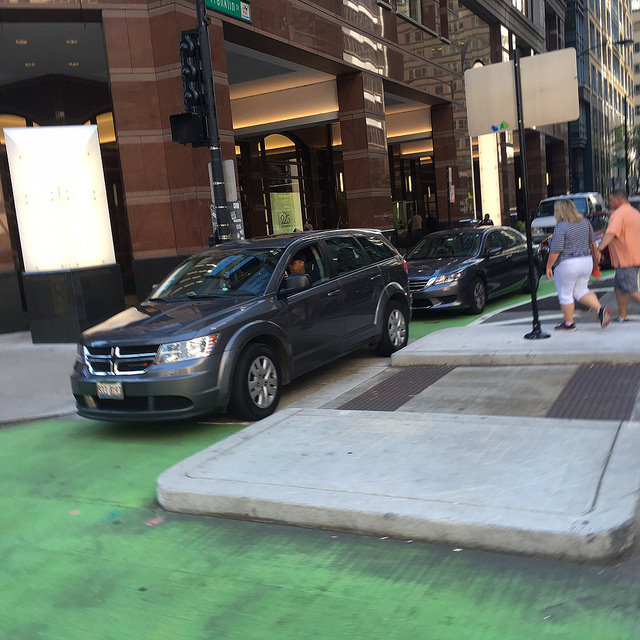 Our Clear the Way Campaign has officially come to an end, and the response couldn't have been better.

The photo pictured to the left takes the cake as the most atrocious Clear the Way violation. It depicts a line of cars blocking a concrete-buffered, painted bike lane, as well as the crosswalk.

And there’s plenty more where this one came from: check out our Flickr page to see an album of all the photos we received!

In just one month, we received over 500 reports from people all over the area, and your efforts are already starting to have an effect.

The city recently added a new option to its 311 hotline to make it quicker and easier to report a blocked bike lane, and CBS News put a spotlight on the related dangers facing Chicago’s biking community.

In his recent budget address, Mayor Emanuel announced that the 311 system will be further upgraded to be able to receive reports via text messages and Tweets, in addition to phone calls and online reporting forms.

But we’re not stopping there.

Active Trans is using your photos and experiences to create a list of recommendations to present to city hall, and we are also pushing the city to move forward on a strong Vision Zero plan that will address the safety of our streets.

While Clear the Way may be over, it’s more important than ever to continue calling 311 when you see a bike lane or sidewalk blocked.

The police department has many priorities, but your efforts can help to move bicycle and pedestrian safety up the list.

We want to give a special shout out to James Hillis, who submitted the most photos to the campaign. James told us that “the opportunity to help document what works and what doesn't — connecting our leadership to the experience of everyday Chicagoans trying to move around town — is both exciting and empowering.” We couldn’t agree more!

Thanks for all the hard work to James and everyone who sent in photos — you are making a difference.

Sign our Vision Zero Call to Action to let city officials know that you are tired of feeling unsafe due to bike lane blockages, sidewalk disrepair and other obstructions.