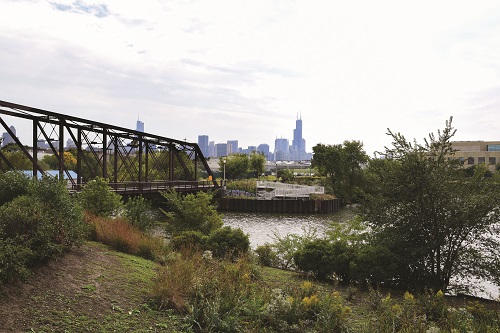 Chicago city planners have unveiled draft concepts for extending the 606 to the east and building a seven-mile continuous river trail loop along the North Branch of the Chicago River.

Linking the 606 to the downtown core via a low-stress, off-street trail would create an active transportation corridor for people of all ages and abilities – one of the key goals of Active Trans' Bikeways for All campaign.

These draft concepts were presented by city planners as part of the ongoing process for the North Branch Framework Plan for the Mayor’s Industrial Corridor Modernization initiative. The study area includes spaces within half of a mile of the Chicago River from roughly Armitage Avenue to Grand Avenue.

The Industrial Corridor Modernization initiative, which is focused on guiding future development and investment in Chicago’s industrial zones, may sound like an unlikely place to advocate for better walking, biking, and public transit. However, planners need to consider how any new activities and development will impact the transportation needs and demand for open space in the area.

In addition to the river trail and 606 extension concepts, the project team presented several other ideas that would help promote alternative transportation.

As a near term priority, the team identified no fewer than five potential sites for new bike and pedestrian bridges across the Chicago River, a major barrier for people on foot or bike. These new bridges would also make the corridor much more accessible to nearby public transit stations.

As a longer term goal, the project team also proposed alternatives for a transitway to improve connections between the corridor and downtown transit hubs.

A second public meeting will be held in January to review other study topics before the North Branch plan is finalized later in Winter 2017. Industrial districts in Pilsen and Little Village are also slated to undergo a similar planning process, but a timeline has not yet been shared for those activities.

Active Trans will continue to monitor this process as it moves forward and let our members and supporters know about how to get involved. In the meantime, you can review the draft concepts and submit comment via email to dpd@cityofchicago.org or use the city’s online mapping tool to suggest other ideas.