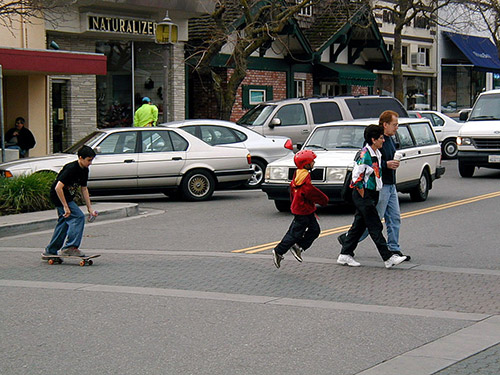 The Chicago Department of Transportation (CDOT) announced this week it has hired academic experts to review the city’s red-light camera program and determine criteria for future placement of safety cameras.

Northwestern University’s Transportation Center, in partnership with experts from Texas A&M and Florida State, will lead the study and look at the impact of the technology in reducing crashes, especially those crashes resulting in serious injuries and fatalities.

“We’re taking a comprehensive look at intersection safety and the role red-light cameras have played in this based on data and evidence. Safer driver behavior. Compliance with red lights,” lead researcher Hani S. Mahmassani told the Sun-Times. “And, of course, looking at crashes that have occurred at and around intersections that are equipped.”

Last March Active Trans was joined by physicians, traffic safety experts and victims of traffic crashes in calling on city leaders to perform an independent evaluation of the safety impact of individual red light camera locations.

This study will allow the city to maximize the safety benefits of the technology, which has been proven to be effective at reducing serious crashes and multiplying the power of police to enforce the law. Reckless driving is rampant in the city and there aren’t enough police officers to combat the problem.

Better enforcement makes our roads safer for everyone, particularly people walking and riding bikes who are most vulnerable.

Enforcement is just one tool used in taking a comprehensive approach to Vision Zero in Chicago and across the U.S., along with public awareness and education programs, policy changes, and improvements to traffic engineering and street design.

Last week Chicago joined a national network of cities working to achieve progress on Vision Zero, and we reiterated our call for the city to establish a Vision Zero task force and develop an action plan that brings all public agencies to the table.

Sign our petition to city leaders calling for more progress on Vision Zero.