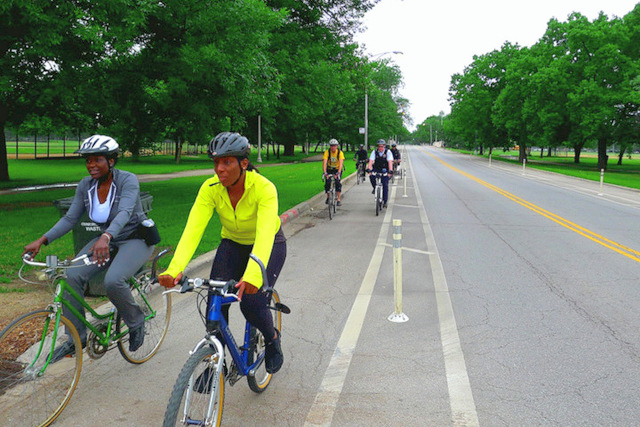 We’re excited that Mayor Emanuel recently announced that Chicago will build 50 more miles of “better bike lanes” by 2019, including nine miles in 2016.

The mayor made the announcement on the site of new concrete curb separated lanes on 31st St. along the Illinois Institute of Technology campus. The city also plans to add up to 15 miles of buffered (wide) bike lanes and to restripe 20 miles of the existing on-street bikeways network in 2016.

Five years ago, a lot of people thought Active Trans was asking for the moon and stars when we called for a network of barrier protected bike lanes (PBLs). PBLs have physical separation between vehicles and bicycle traffic using parked vehicles, plastic posts and more recently concrete curbs.

The first PBLs were installed on Kinzie in 2011, and their popularity grew as the city built more of them.

There are 23 miles of PBLs today along with another 80+ miles of buffered (wide) bike lanes. There was a lot of grumbling about PBLs within the first few years. But the conversation today has gone from, should Chicago build PBLs at all, to why don’t we have more and how do we build them better? That’s progress!

Last fall, we laid out our Bikeways for All vision that identifies priority streets for PBLs and neighborhood greenways as well as where to add urban trails.

Chicago’s pace for installing bike lanes has been among the fastest in the nation, and when you take the mayor’s goal for 50 miles of “Better Bikeways” plus plans for additional buffered bike lanes, the pace should stay roughly the same while the quality of new facilities improves.

The city’s progress since 2011 in building out the network of low-stress bike routes has been transformative, but there’s much more work to be done before Chicagoans of all ages and abilities feel safe and comfortable riding.

We will continue to work with Chicago DOT and aldermen to not only meet the city’s goals but to exceed them. Bikeways for All proposes 180 miles of new low-stress biking routes long-term, including building 100 of those miles by 2020.

Join our advocacy list to endorse our Bikeways for All vision and learn about opportunities to contact your elected officials about the city’s bike network.