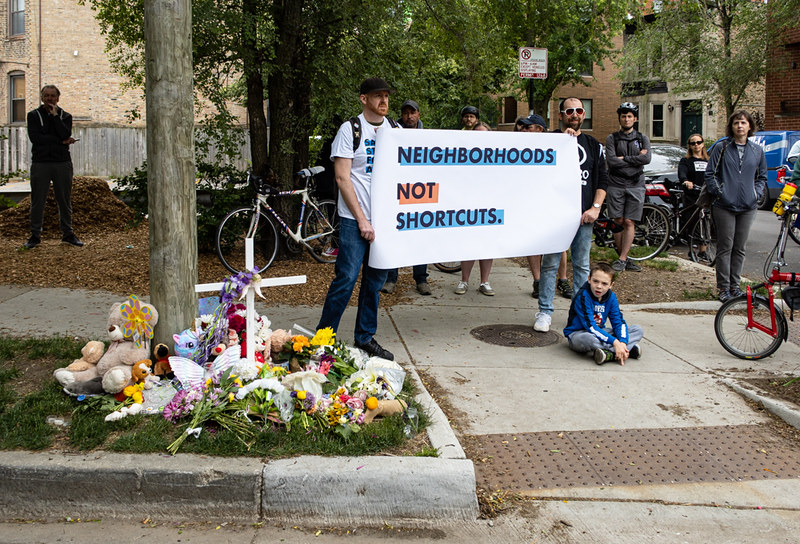 Over the weekend, more than 300 people took to the streets to honor two young children recently killed by drivers on Chicago’s North Side.

The memorial event — held for Raphael “Rafi” Cardenas and Elizabeth “Lily” Grace Shambrook — was attended by people who were demanding that the city take action to make our streets safe places to walk and bike.

These recent tragedies, combined with the increasing number of people getting killed by drivers while walking and biking in Chicago, prompted the Active Transportation Alliance to issue an urgent message to city leaders.

I am writing today with an urgent call to action to make our streets safer.

On June 12, hundreds of residents gathered to mourn the passing of two young children, two-year-old Rafi Cardenas and three-year-old Lily Grace. Both children were killed in preventable crashes caused by unsafe street design. Rafi was using a crosswalk and Lily was riding on her mother’s bike on a designated bike route. These are the places we tell people they can safely walk and bike. Not long after the event memorializing these tragedies, another pedestrian was struck and killed nearby while crossing Irving Park Road. Another day in a city that has handed over too much space to cars and trucks, while failing to keep people walking and biking safe.

The City of Chicago must do more to slow car and truck speeds and volume, especially on neighborhood streets like the ones where Rafi and Lily were killed, and to make our public ways safe for pedestrians and cyclists.

The reasons given by the City of Chicago for slow and patchwork progress include lack of funding, lack of staff capacity, the parking meter deal, an unsupportive state DOT, and aldermanic and community opposition. None of these are insurmountable, especially in this moment when Chicago has dedicated capital dollars for bike facilities. We need bold leadership and the will to take decisive action and confront ill-informed opposition to commonsense changes.

We are eager to work with you to address the following obstacles.

We are eager to act and to partner with you as we mobilize, educate, hold officials accountable, and fight for needed policy change — so that all Chicagoans have the safe streets we deserve.