City announces quick-fixes for Milwaukee Ave slated for this summer 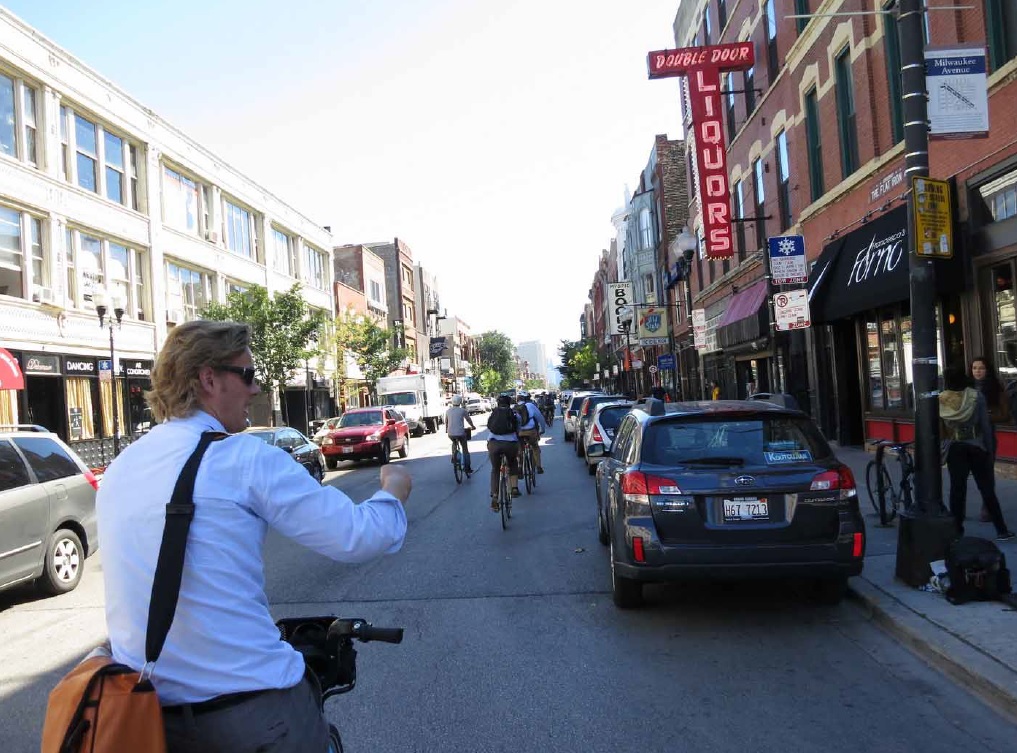 Last night, residents had a chance to weigh-in on how to make Milwaukee Avenue in Wicker Park safer and more people-friendly, kicking off an exciting opportunity to advocate for much needed upgrades on one of Chicago’s busiest streets for people walking and biking.

Of the nearly 100 people who showed up for the event, the majority seemed to support making the street safer and more welcoming to people walking and biking.

The Chicago Department of Transportation (CDOT), along with Wicker Park Bucktown SSA #33, and local aldermen Joe Moreno (1st ward), Brian Hopkins (2nd Ward), and Scott Waguespack (32nd Ward), hosted the open house meeting at AN Pritzker Elementary school in Wicker Park to discuss a project to install low-cost pedestrian and bike improvements for Milwaukee Avenue by the end of this summer.

CDOT is looking to the recent Wicker Park Bucktown Master Plan for inspiration on the project. That’s good news since the master plan includes many bold ideas, such as removing a lane of parking to create space for bike lanes and transforming the intersection at Milwaukee/North/Damen.

Projects like these are what’s needed to achieve our goal of eliminating traffic fatalities and creating a network of low-stress Bikeways for All. That’s why it's so important for Active Trans members and supporters to get involved in this opportunity to push for change on our streets.

CDOT plans to move quickly on identifying projects they can immediately get in the ground. After collecting input at this initial meeting, CDOT will share potential projects at a second public meeting in mid-July with plans to immediately install improvements later in the Summer of 2017.

We’ll be sure to keep our members and supporters updated on meeting dates and how to get involved.

The goal of this first meeting was to solicit input from residents on current challenges facing people walking and biking on Milwaukee Avenue, focusing on the corridor from Armitage Avenue to Division Street and the six-way intersection at Milwaukee/North/Damen.

CDOT was also eager to hear people’s ideas on a menu of potential low-cost, near-term improvements, such as using paint and posts to create more space at intersections for pedestrians and adding bike boxes that allow people on bikes to be more visible and get ahead of traffic while stopped at a light.

During the presentation portion of the evening, the aldermen were united in their message that the time has come to address the challenges facing Milwaukee Avenue and the six-way intersection at Milwaukee/North/Damen. Alderman Hopkins spoke of seeing multiple instances of people on foot or on bikes nearly getting hit by cars while recently observing the intersection for just one hour.

The urgent need for improvements to the corridor was also underlined by crash data shared by CDOT. According to the data, there were 74 reported dooring crashes over five years – 6 percent  of the citywide total in this corridor. (View slides from CDOT's Milwaukee Avenue presentation.)

Active Trans' own analysis of recent crash data showed between 2011 and 2015, the most recent year for which data are available, there were 195 bicycle injury crashes, 56 pedestrians injured, and one pedestrian fatality on this stretch. View our maps of pedestrian crashes and bicycle crashes on Milwaukee Avenue.

Thank you to everyone who took the time to come out to the meeting in support of safer streets. Your participation makes an enormous difference. Check out CDOT's Milwaukee Avenue project page for more information.

Stay tuned to Active Trans blog for updates on this opportunity to bring change to Milwaukee Avenue. For more information on how to get involved, please contact Jim Merrell at jim@activetrans.org or 312-216-0470.