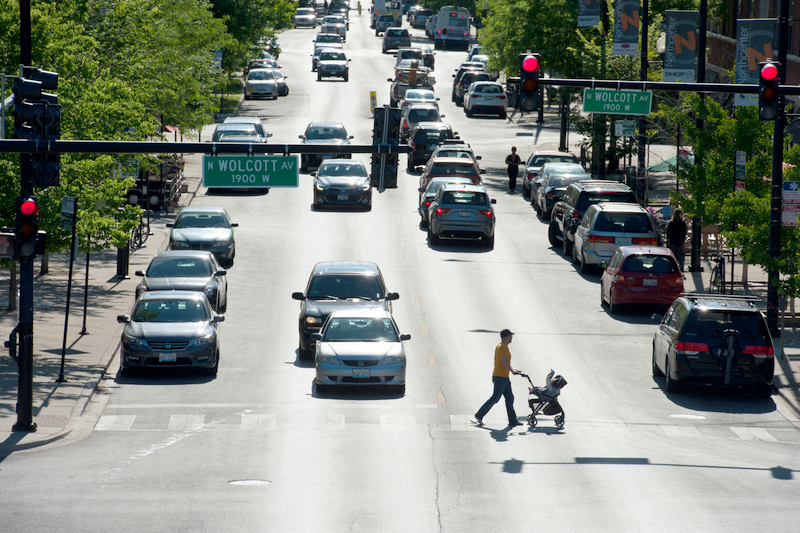 Making a city as vast and diverse as Chicago more walkable is an ongoing battle, and a new report shows there’s much more work to be done.

This week Walk Score released an updated list of the most walkable cities in the U.S. and, although Chicago’s score remained stable (74.8), our ranking dropped from fourth to sixth.

Philadelphia and Miami leapfrogged Chicago since the scores were last updated in 2011, joining New York, San Francisco and Boston as the most walkable cities in the country.

As more residents of all ages embrace walkability as critical to overall convenience and quality of life, more people are looking to Walk Score – which can be broken down by neighborhood – when choosing where to live, work and spend time.

Chicago’s stagnant rating shouldn’t be interpreted to mean no progress has been made over the last four years. People walking are now the top priority in the city’s default street design guidelines, resulting in improvements like more refuge islands, enhanced crosswalks and crossing signals in neighborhoods throughout the city.

Still, fast moving cars remain a major obstacle to true walkability in Chicago. Too many residential neighborhoods are filled with supersized, multilane roads that encourage drivers to speed and make crossing the street intimidating, or even impossible.

Attempts to calm traffic with photo enforcement or by converting available street space to bike lanes or crossing islands have been successful in some areas. In other areas, local voices focused solely on ensuring cars travel as fast as possible have stalled progress.

A handful of major projects over the next few years have the potential to significantly boost Chicago’s walkability. In June the elevated, multiuse Bloomingdale Trail – or 606 – will open on the Northwest Side, connecting several neighborhoods. Construction is underway to improve and expand the Riverwalk downtown, which by 2016 will provide an uninterrupted pathway from the Lakefront Trail to Lake Street.

On the lakefront, progress is being made on the Navy Pier Flyover to relieve congestion and safety concerns for people biking and walking on the most popular path in the country, and multiple new access bridges over Lake Shore Drive for people walking and biking are on the way.

These projects alone likely won’t result in a major spike to our Walk Score, but they could keep us moving in the right direction. More dramatic progress will require further redesigning our streets to calm traffic and accommodate everyone, particularly people walking, biking and riding transit.