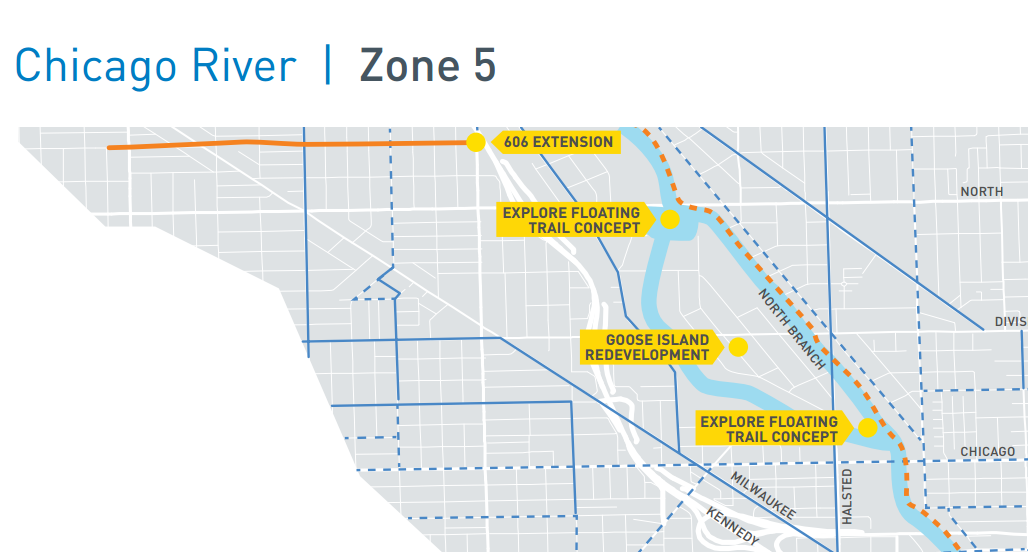 City planners recently unveiled concepts that support a continuous trail along the Chicago River. These ideas were presented by planners during an update about the North Branch Framework for the Mayor’s Industrial Corridor Modernization Initiative.

This industrial corridor runs from West Kinzie through West Fullerton Avenues, separating Bucktown from Lincoln Park, and covers all of Goose Island. As the first of twenty-six industrial corridors under review, the North Branch framework will have important implications for future city plans.

While the framework covers many policy areas, city officials presented promising ideas that would go a long way towards filling one of the largest remaining gaps in a Chicago River Trail, as envisioned in Active Trans’ Chicago River Trail Action Plan

The map illustrates how the Goose Island Redevelopment fits within the vision of a Chicago River Trail.

Key transportation projects in the framework include:

We need your help to ensure that walking, biking and public transit remain a priority! The Chicago Department of Planning and Development plans to present the framework to the Chicago Plan Commission for approval in April, 2017.

If the plan is approved, the city will use it to evaluate future development proposals in this area. Active Trans will continue to monitor this process and let our members and supporters know how to get involved. In the meantime, here are three ways you can help: