Chicago ranked near bottom of list of bike-friendly big cities 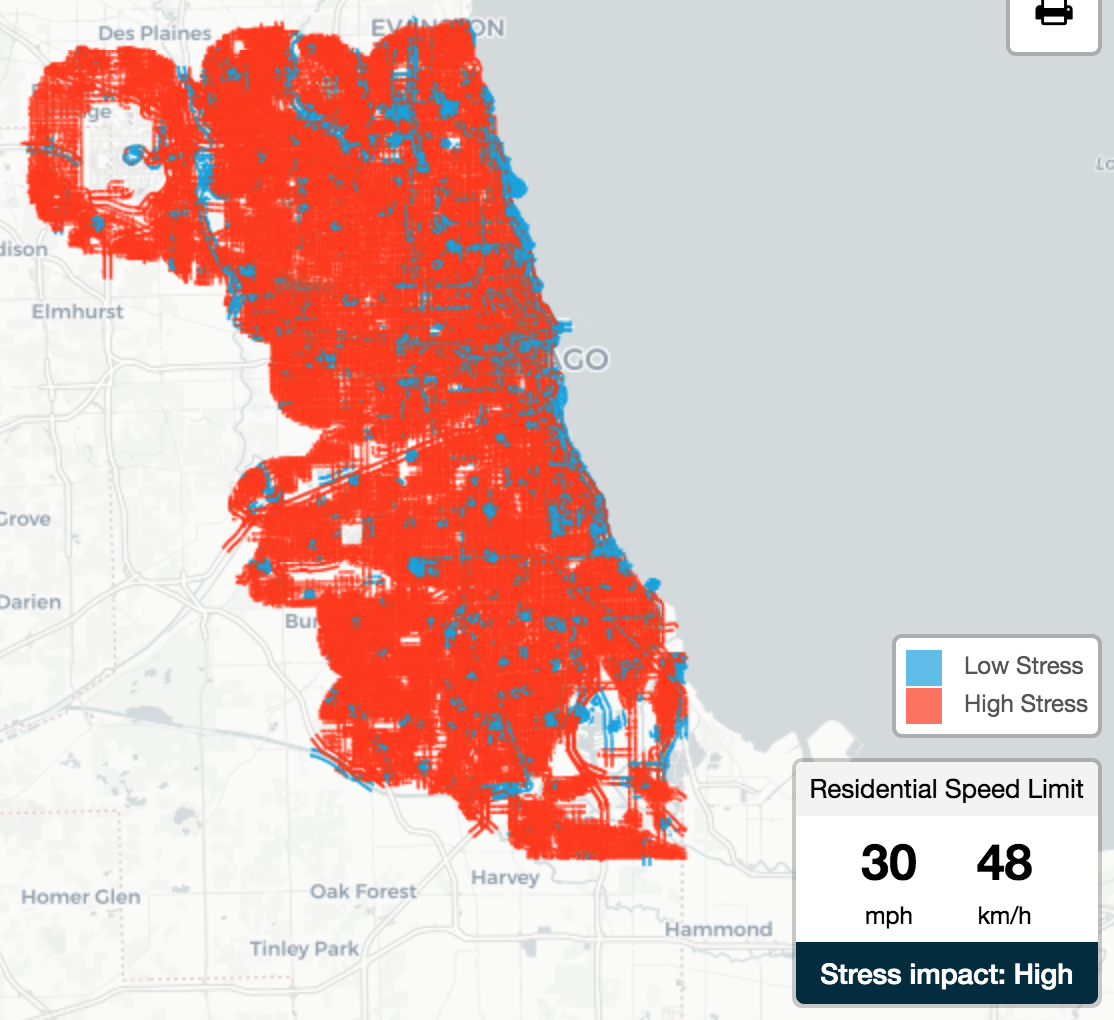 With high speed limits and few low-stress bike routes, Chicago and its largest suburbs score poorly in a new international ratings program designed to evaluate a city’s level of safety and comfort for people biking.

The City Ratings program was developed by People for Bikes, a national non-profit bicycle advocacy group. It ranks cities based on the quality and connectivity of their bicycle networks, and includes 21 cities in the Chicago region.

Cities that rose to the top of the rating system were those with safe, comfortable bike networks intentionally built for people of all ages and abilities.

Also, the 30 miles per hour default speed limit on local streets means nearly all of that network is high-stress and not usable by most people who are interested in biking.

To better understand the scores and how Chicago and our region can ramp up our efforts to build safer, more comfortable bicycle networks, we explored the city ratings program in more depth.

HOW CITIES WERE RANKED

The network score rates cities on the quality and connectivity of their bicycle network and accounts for 80 percent of a city’s overall score.

The network score looks at how easily someone can access everyday destinations such as grocery and retail stores, as well as hospitals, jobs, schools, and transit hubs while using a low stress bicycle route.

Low stress routes were defined as streets with speed limits of 25 mph or less or busier streets with protected bike lanes or separated paths.

The community score uses an online survey to understand ridership habits, awareness of local resources, and if people feel biking is a safe and convenient option for them to get around.

This score, while limited to those who take the survey, accounts for 20 percent of a city’s overall score.

In the case of Chicago, the city ratings system shows us where our weak spots lie. The city has a default speed limit of 30 mph, considered stressful by many potential bicyclists, and lacks a strong citywide network of protected bike lanes and separated paths.

Research shows around 50  to 60 percent of people in most U.S. cities fall into an “interested but concerned” category of bicyclist.

While confident riders may have no issue riding on streets with high vehicle speeds and heavy volumes, a majority of people are concerned about their safety and feel uncomfortable riding in traffic.

Their concerns are backed by research. A direct correlation exists between vehicle speed and the severity of an injury in a crash, even on residential streets.

According to the Federal Highway Administration, a person hit by a car at 20 mph has a 90 percent chance of survival, while at 30 mph a person’s survival rate drops to 50 percent.

By reducing Chicago’s default speed limit to 25 mph or less and investing in traffic calming, city streets will feel more comfortable for people biking, including children, families, and those who consider themselves “interested but concerned.”

In recent years, Active Trans has campaigned for Chicago to lower its default speed limit. City leaders are exploring it as part of the Vision Zero Chicago initiative to eliminate traffic crashes and save lives.

Lowering the default limit likely requires a change in state law, which Active Trans is considering pushing for in the 2022 legislative session next January.

In addition to lower speed limits, Chicago desperately needs more protected and separated bike lanes. Protected bike lanes have been proven to save lives, reduce injuries, and encourage more people to use bicycles as everyday transportation.

A decade ago, the Chicago Department of Transportation drew up a plan to build a network of protected bike lanes. Unfortunately, only 15 percent of this network has been built.

Only 25 of Chicago’s 357 miles of bike lanes feature infrastructure that physically separates people biking from car and truck traffic.

To learn more and encourage the city to make more progress, check out our interactive report.

Please consider signing on as a supporter of our effort to bring more protected bike lanes in Chicago.

Overall, the city ratings system highlights the importance of building low stress bicycle networks that can be used and enjoyed by a broad range of people.

Many other U.S. cities are making great strides in transforming their streets. With strong community and government leadership, the Chicagoland region has the ability to do the same.

The following Chicagoland cities were rated by People for Bikes in 2021. The overall ratings were out of a total of 100 points. Schaumburg earned the top spot in our region with 40 points.

If you don’t see your community in the list below, you can send People for Bikes a request to include your city in the next round of data collection.

Click the links below to see more details of each city’s network and community analysis, including a map of low stress bike routes.