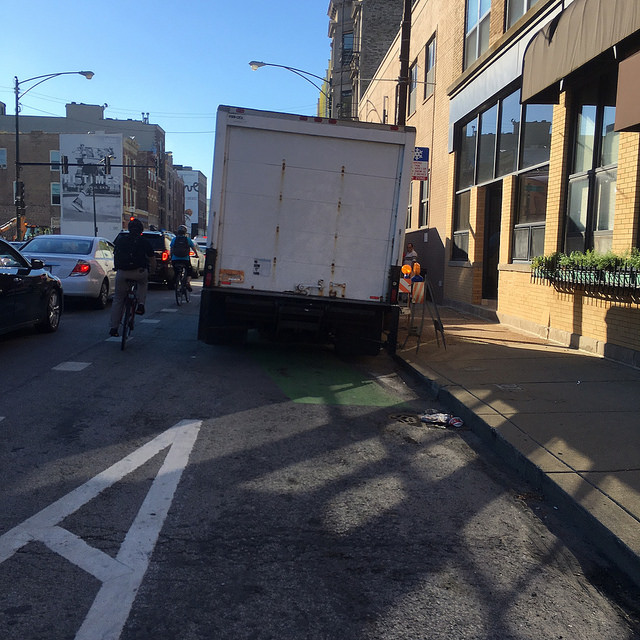 Helping the city identify hotspots for blocked bike lanes just got easier with an update to Chicago’s 311 system.

According to the Chicago Department of Transportation, the city has activated a new 311 category for residents to report vehicles blocking bike lanes:

“The City of Chicago has implemented a new 311 code so that people riding bikes can easily report a 'Vehicle Parking in a Bike Lane.' This information will be used by the City to identify hotspots and prioritize enforcement. However, the City does not have the resources to respond to each individual report. People can call 311 or use the 311 web system to file a report. We’re asking cyclists to report the day(s), time(s) and locations(s) that they observe vehicles parking in bike lanes.”

The update to the 311 system comes on the heels of news that the Chicago Department of Finance is adding bike routes to patrol maps and using 311 reports to help inform priority areas for enforcement.

Last Fall, Active Trans’ Clear the Way campaign encouraged our members and supporters to report dangerous obstructions of bike lanes and sidewalks to call attention to the need for improved enforcement. Hundreds of you took action and help us document infractions around the city.

We commend the city for taking steps to make it easier for residents to help flag problem areas for obstructed bike lanes. Documenting hot spots for blocked bike lanes will help the city use traffic enforcement to improve public safety, while helping ensure enforcement patterns are fair.

Stay connected to Active Trans advocacy by signing up for email updates.